Welcome to the first entry for Cryptids State-by-State.

States have plenty of official things-- rocks, flowers, mammals, fish, trees, mottos, fossils.  Even state soils.  Yet there are no state cryptids-- a grievous oversight that I aim to fix.

I've been thinking about doing this blog off and on for a while now.  With Halloween approaching, I figured this would be an opportune time to finally get things rolling.

There's a ton of cryptid artwork out there, especially for famous critters like the Mothman, Sasquatch, Lake Monsters, Flatwoods Monster, etc.  So I've tried my best to make my little doodles stand out a bit.  You can judge how well I succeeded.

For my first entry, I originally wanted to start off with the unofficial cryptid of my current home, Connecticut.  The Nutmeg State's creatures are the Melonheads, whose mythology I have a bit of a problem with.  I'll explain more when I get to their entry soon.

So instead, this week's entry is the State Cryptid of Massachusetts: 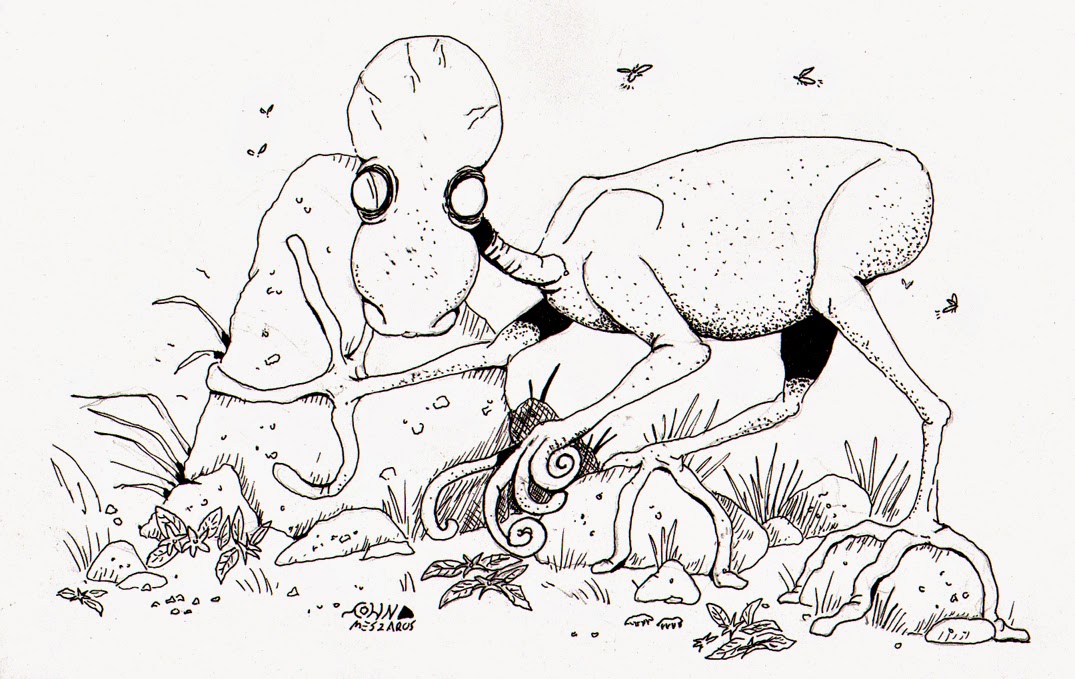 On the night of April 21, 1977, three teenagers were driving in their hometown of Dover, Massachusetts.  One of the boys, Bill Bartlett, spotted a strange creature with a massive, hourglass-shaped head crawling on all fours along a rock wall.  As the car passed by the being, it turned its head and its eyes flashed with orange light.  Bartlett later described the Demon as having pale, peach-colored skin that appeared rough like sandpaper, and toes that curled around the rocks as it moved.
Later that night another teenager, John Baxter, saw a figure approaching him in the shadows as he walked home from his girlfriend's house.  Thinking it was a friend of his, he called out.  The being did not respond, and as Baxter drew closer, it ran off.  He followed it halfway across a roadside gully, before stopping to observe it at a distance.  Like Bartlett, Baxter described the Demon as having a figure-eight shaped head and toes that curled around the contours of rocks and a tree it leaned against.  Before he could get a better look, the Demon ran off.

The creature's description initially resembles a classic "Gray" alien-- with its large eyes, enormous head and spindly body.  But there were no reports of UFO activity at the time.  Additionally, other features stray from the usual alien myth, such as its quadrapedal stance, it's glowing orange eyes and it's odd toes.

Some skeptics think the "Demon" was nothing more than a baby moose distorted by the darkness and by the brief glimpses the witnesses had.  It's glowing eyes could merely have been the light reflecting back from the headlights of the car or another bright light source-- a phenomenon called eyeshine.
I tried to make my Dover Demon reflect a bit of the "baby moose" explanation, at least in the face.  But I wanted it to still have an otherworldly look, with its spindly neck and egg-shaped body.  I ran with the idea of its toes curling around the rocks and made them more like boneless tentacles.

So there you go, Massachusetts-- you're the first state to get your very own wicked awesome unofficial Official State Cryptid.

http://cryptidz.wikia.com/wiki/Dover_Demon
Posted by John Meszaros at 11:43 PM No comments: