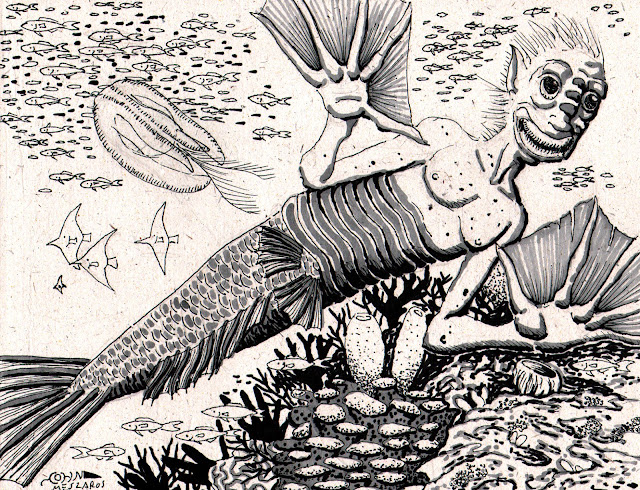 For a brief period in 1631, Dutch colonists in North America tried to establish a small settlement named Zwaanendael along the Delaware River. Unfortunately, the colony did not last more than a year before it was destroyed in a skirmish with local Native Americans.

Despite its brief existence, Zwaanendael is credited as the first known European settlement in the region that would become Delaware, and the 300th anniversary of its founding was commemorated with the creation of the Zwaanendael Museum. Despite its name, the Museum focuses not on the ill-fated colony, but on the entire history of southeastern Delaware as a whole. There are exhibits on the ecology of the river estuary, local history- particularly the British attack on the city of Lewes in the War of 1812- and the lighthouses of the region.

The Museum also houses a strange little curiosity: a mummified “mermaid” in its own blue velvet-lined glass case. The mermaid was given to the prominent Martin family in the city of Lewes (built on the site of the vanished Dutch colony) by a sea captain. In 1941, the mummy was permanently lent to the Museum until 1985 when locals bought the creature from the Martin’s estate to ensure that it remained a permanent fixture of the museum.

The Zwaanendael mermaid bears little resemble to the classic image of these aquatic beings as attractive women with fish tails. A wide toothy mouth and large, ridged eye sockets dominate its simian face. Its hands are clawed like a reptile’s. It’s torso is covered in bony ridges. Its skin and scales are an ashy gray-black  On top of all that, the creature is small- no more than a foot or so in length. It bears a much closer resemblance to its “cousin”, the Fiji Mermaid, made famous by P.T. Barnum. Both creatures are, of course, clever taxidermy specimens akin to jackalopes, jenny hanivers, or fur-bearing trouts. They are also part of a larger tradition of taxidermied monsters that have their roots in 18th century Japan.

Misemono were a popular type of carnival in Old Edo (modern-day Tokyo). They featured all manner of entertainments- actors, storytellers, exotic animals, local craftsmen- which were believed to bring good luck and fortune to attendees. One of the more unusual sights at the misemono were the bodies of mermaids or ningyo. Unlike the beautiful mermaids of Europe and the Mediterranean, ningyo were more monstrous and fish-like. In Japanese legends, eating the flesh of one of these creatures was said to grant renewed youth and immortality, though obtaining this delicacy often leads to dire consequences since ningyo could curse those who killed their kin. They could even destroy entire towns with hurricanes and tsunami.

Despite the risks, it was still popular to display mummified “ningyo” at carnivals in the hopes that at least a little of that coveted youth and longevity would rub off on attendees without requiring them to actually eat the creature’s flesh.  And if a mermaid was too hard to come by, a taxidermied substitute certainly wouldn’t hurt. Thus there developed a cottage industry of fishermen constructing ningyo out of the bodies of fish and small monkeys dressed up with paper-maché, wood and lacquer.
The ubiquity of fake ningyo meant that inevitably more than a few of them would make their way overseas, brought home as curiosities by sailors from America and Europe, where the folklore behind the creatures was lost, leaving them blank slants upon which others could write their own mythologies.

Ningyo are actually only one category of manufactured Japanese monsters. Mummified oni, kappa, tengu and other yokai were also common created as carnival attractions. Some of them even ended up at Buddhist temples, perhaps to add a bit of tangibility to the unseen supernatural world.

The Night Parade of One Hundred Demons: A Field Guide to Japanese Yokai, written and illustrated by Matthew Meyer

The State of Delaware's official website about the museum

Roadside America's article on the Zwaanendael mermaid (or merman in this case, I guess)

Pink Tentacles' article on other monster mummies of Japan

Posted by John Meszaros at 9:24 PM No comments: 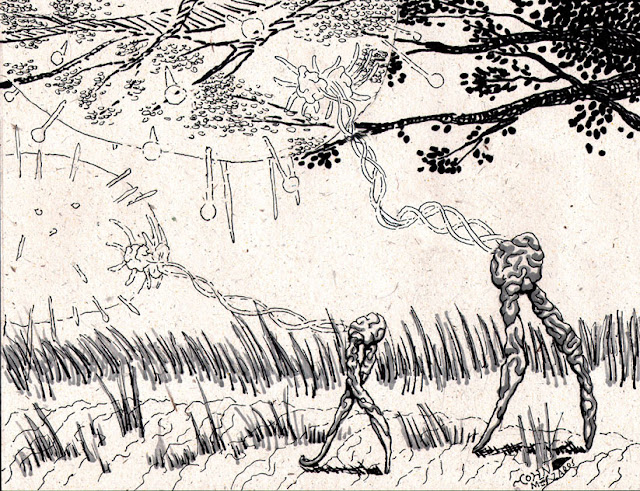 I’m fascinated by the concept of beings existing in higher dimensions beyond the four that we know. Beings that we see only fleetingly as they move through our plane of existence. In order to get a better handle on this idea, imagine a two-dimensional being living on a flat surface that has length and width but no depth. A three-dimensional creature passing into this 2-D universe would only be visible as the part of them that is immediately passing through the plane. Thus, they would appear as “slices” of the whole. As a shifting 2-D blob, seeming to expand and contract and twist. If you’ve ever read the book Flatland by Edwin A. Abbott, you’ll have a good idea of what I’m talking about.
Now, imagine that one of these higher-dimensional beings is so immense that even the parts that do pass into our dimension- parts which seem large to us- are actually just the tiniest cell components to this leviathan.

This is what I’ve imagined for this version of the Fresno Nightcrawlers. Here, the “walking wishbones” are actually gigantic versions of microscopic proteins known as kinesins. Within every cell is a network of strands called microtubules which act as a sort of “railway” for the transport of important molecules and cellular building blocks. Kinesins are proteins that transport these molecular cargos along the microtubules via a long chain attached to them. To move, kinesins use a “hand-over-hand” (or, more accurately, “protein head over protein head”) motion which looks remarkably like walking.

Here’s an awesome animation of kinesin at work:

In this scenario, the Nightcrawlers are the only visible part of the cellular structure with the cargo, attachment chain and microtubule pathway the “creature” is moving on existing in a dimension we can’t see.

Why, though, is this one component visible in our dimension? Perhaps there is something about the physical structure of our universe that makes them more stable or efficient, much like how many enzymes work best in a warmer environment.

Or perhaps the appearance of these beings in our dimension was only a fleeting accident that just happened to be caught on film.

Extrapolating from the idea of the Nightcrawlers as giant kinesin proteins, I also created a few more giant molecules from this unfathomably huge beast that might accidentally drift into our plane of existence for a few moments. 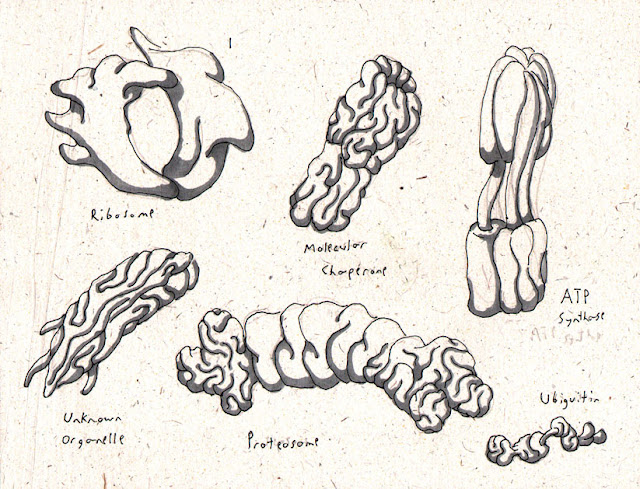 Ribosomes are bundles of RNA and proteins that read the cell’s DNA to build new proteins.

Proteosomes and Ubiquitin are enzymes designed to break down other enzymes and proteins that are no longer needed.  Ubiquitin attaches a tag to proteins, and proteosome attacks these marked molecules, breaking them down into its constituent amino acids.

There would, of course, be billions of molecules in this higher-dimensional titan that would have no equivalent to Earthly structures. Thus the inclusion of an “Unkown Organelle”

On a final note, here’s another fun little animation explaining the role of kinesin in the body:


Our Molecular Nature: The Body's Motors, Machines and Messages by David S. Goodsell
Posted by John Meszaros at 7:47 PM No comments: