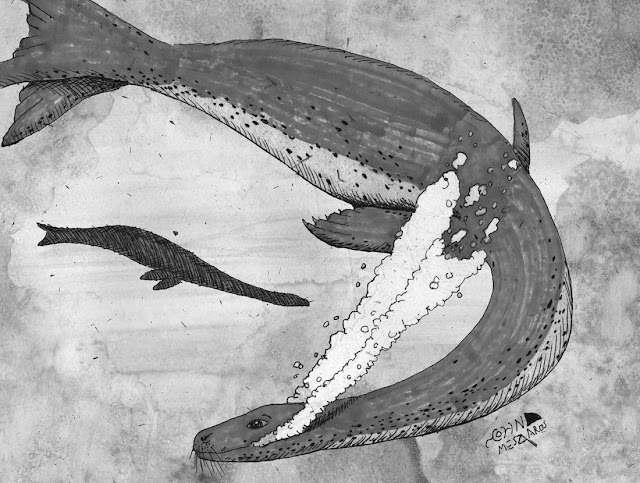 Lake Champlain is a long, narrow body of water situated primarily in Vermont, though sizeable portions of it extend into New York and the Canadian province of Quebec. The lake is named after Samuel de Champlain, a French explorer who mapped much of the area along the Saint Lawrence Seaway and founded the colony of New France.

Like many large bodies of water across the world, Lake Champlain is believed to be the home of a mysterious aquatic monster. Nicknamed Champ, or affectionately “Champy” by locals, the creature is said to be a dark gray or black serpentine beast with a long, swan-like neck and several humps on its back. Fairly typical for lake beasties, really.

According to some sources, legends of a monster living in the lake go back to the original Abenaki peoples who called it Tatoskok. The first known account by a European was in 1819 when a scow captain claimed to have seen a bizarre looking “black monster” that had a head like a “sea horse”, three teeth, onion-colored eyes, a white star on its forehead and a belt of red around its neck. True or not, this incident marked the start of a string of sightings throughout the 19th and 20th centuries. Champ quickly became a popular legend around the Champlain Valley, to the point that in 1873 famous showman P.T. Barnum offered a substantial reward for the beast’s capture.

Perhaps the most famous piece of evidence for Champ was a photo taken in 1977 by Sandra Mansi. According to Mansi, she was at the lake with her fiancée and two children when what appeared to be an animal with a long, swan-like neck suddenly emerged from the water only about 150 feet away. As Sandra and her fiancée scrambled to get the children out of the water, the object appeared to move as if peering around. Sandra snapped a single photo of the thing before it sank back below the waves once more.

The photo very clearly depicts what appears to be the humped back and snake-like head of some sort of creature. While many have claimed that the object in the photo is clearly a living animal, science writer Darren Naish, along with other skeptics, believes it is only a submerged log that briefly bobbed to the surface before sinking again. His Tetrapod Zoology blog has some pretty interesting model images to back up his claim.

Champ, like Nessie and many other lake monsters, is popularly thought to be a surviving plesiosaur. However as a cold-blooded reptile, a plesiosaur would likely not have been able to tolerate the frigid waters of the lake. There is also the fact that plesiosaurs had stiff necks held out straight in front of them, whereas Champ and its cousins often have flexible, swan-like necks. While it’s certainly possible that over millions of years plesiosaurs developed flexible necks and a warm-blooded metabolism, there is actually a more plausible candidate for the monster’s identity (assuming it is a real animal): a long-necked seal. 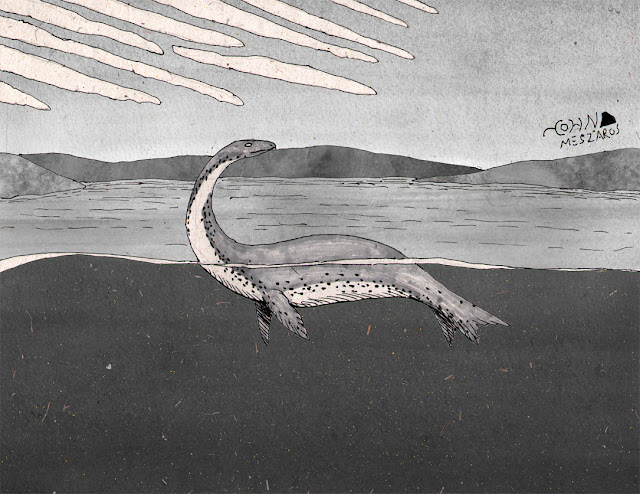 In his 1968 book “In the Wake of the Sea-Serpents”, cryptozoologist Bernard Heuvelmans postulated that aquatic cryptids could be grouped into nine categories, one of which was a long-necked seal. But even before Heuvelmans, C.A. Oudemans wrote in his 1892 book The Great Sea Serpent” of his theory that sea and lake monsters were actually a kind of swan-necked pinniped (the group of animals to which seals belong along with sea lions and walruses). Even earlier than this, though, comes a description of a long-necked seal in James Parsons 1751 “A dissertation upon the Class of the Phocae Marinae” in which he apparently makes a scientific description based on what appears to be an actual specimen in his possession (a specimen which has, naturally, disappeared).

There is actual fossil evidence for long-necked seals. Acrophoca longirostris is a pinniped from the Miocene and Pliocene coast of Argentina and Chile that has a remarkably elongated neck. Although its length is nowhere near the plesiosaur-level length of reported lake monsters, it does provide a tentative clue to the existence of  long-necked seals.

It’s worth noting that one of the closest living relatives of Acrophoca is believed to be the leopard seal, Hydrurga leptonyx, an Antarctic predator that has an eerie, almost reptilian appearance. If a possible Acrophoca descendant bore a similar appearance to its southern cousin, one could see how it might be mistaken for a plesiosaur.

Some sightings of Champ may actually be explained by an unusual property of the lake itself. When wind blows for long periods across the surface of a long, narrow body of water such as Champlain, the force actually pushes the water and causes it to pile up to one side. When the wind stops, this water flows back and begins to slosh back and forth across the lake, creating an oscillating wave called a seiche. You can see a similar phenomenon by sloshing around in a bathtub full of water. This long, low wave may account for the frequent sightings of a wake or broad hump moving across the lake’s surface.

Lake Champlain has a second, unseen oscillating seiche beneath the surface. As with many lakes, Champlain is stratified into an upper layer of warm water lying over a layer of deeper, colder water. The layers are separated by a distinct boundary called a thermocline. When the wind pushes on the lake’s surface, it piles up the top warm layer, subsequently causing the colder lower layer to be pushed to the opposite side. When the wind stops and the surface begins to oscillate back and forth, the cold water rushes back, setting up its own wave below the surface. Here’s where monster sightings come in. The underwater seiche can be from 30 to 300 feet high! Some researchers speculate that these huge oscillations could stir up sunken logs and other debris that pop up to the surface briefly before sinking back down again, creating the illusion of a monster bobbing to the surface.

Whatever the true nature of Champ- living plesiosaur, swan-necked seal or merely  waterlogged flotsam- the beast has become a much-beloved legend among the locals who live around the lake, and has even received several festivals held in its honor.

A thorough discussion of seiches in Lake Champlain

Not everyone is happy about Champ's popularity...

In the Wake of the Sea-Serpents by Bernard Heuvelmans

The Great Sea-Serpent: An Historical and Critical Treatise by C.A. Oudemans

Posted by John Meszaros at 6:39 PM No comments: 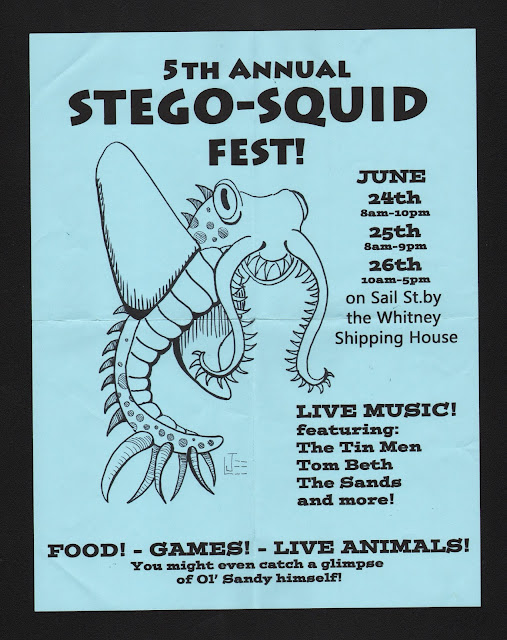 Here's part of a cross-over between my state cryptids blog and my "found object" fiction project, The Astarapomp Dossier

This is a flyer for a fictional festival in Grenhaven, Connecticut (my answer to H. P. Lovecraft's Arkham) celebrating the mysterious (and also fictional) Stego-squids that inhabit the estuary at the mouth of the Connecticut River.

Considering how big the Connecticut River is, and how important it has been to maritime history and trade in New England, it's rather sad that the river has no famous monsters to call its own. So I made some! See if you can guess what sort of creature the Stego-squid actually is. (Hint: it's not actually a cephalopod)