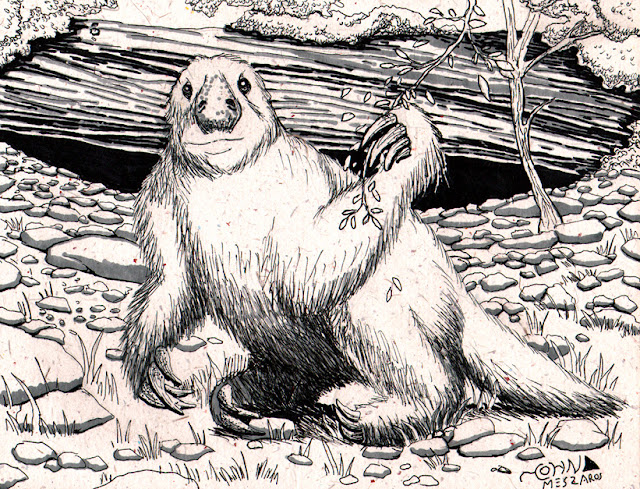 In the summer of 2016, a group of people were taking an evening walk through the woods behind their property in Jasper, Tennesse when they stumbled across a strange, hairy quadruped. That may not seem remarkable at first- especially in a place where coyotes and bears are not uncommon. But this creature was unusual because it had what appeared to be a human-like face. The report of the encounter is vague on exactly how humanoid the creature’s visage was, nor does it state what happened once the people saw it, but the animal was said to have wandered away into the woods shortly after being seen. A few months later a spelunker claimed to have seen a similar small hairy creature crawling up the wall of a cave. Given the shortness of both encounters, along with the poor lighting in each case, the most likely explanation for both beasts is misidentification of a mundane bear, dog or other animal.

But what if these creatures truly were something unknown? What could they possibly have been? How about a large, cave-dwelling sloth? Little more than 10,000 years ago Tennessee- most of North America, in fact- was home to a variety of large mammals collectively called megafauna. These included mammoths, mastodons, saber-toothed cats and several species of giant ground sloths. The most well known of these latter animals was Megalonyx, an animal originally described and named by Thomas Jefferson, who was as much a naturalist as he was a statesman.  Megalonyx is believed to have died off along with the other megafauna as the glaciers retreated from America and human beings spread across the continent. But what if a small relict population survived?

The majority of Tennessee’s bedrock is made of limestone, which is readily eroded by rainwater. As a result, the state is riddled with sinkholes and caves that would provide ample hiding space for a small group of sloths.

There is evidence that several species of giant sloths did inhabit caves at least part of the time.  For decades local people in Brazil have been aware of massive, deep tunnels running through the jungle. The walls of these tunnels are covered in long, deep rows of four parallel gouges. For many years the source of these odd caves was a mystery. Were these made by human tools? Were they some strange effect of erosion?   Last year researchers finally figured out that the most likely makers were giant sloths.

Exactly why ground sloths inhabited caves or dug burrows is still not known. Their thick hides and intimidating claws would have deterred most predators, so it’s unlikely the burrows were for protection. At least for the adults. Maybe the caves protected the more vulnerable young? Or maybe the sloths wandered into the earth to obtain essential salts and minerals much as elephants today will enter caves and dig at the walls to extract the nutrient-rich clays. Regardless of why prehistoric ground sloths inhabited caves, today,  this troglodytic habit would be an excellent way for a small population of surviving sloths to remain hidden from humans.

But why think that the creatures seen in Tennessee were surviving Megalonyx? Admittedly, the encounters were so brief and in such bad lighting that it is difficult to say exactly what the witnesses saw.  The only real hints are the animal’s odd human-like face. The face of a living tree sloth is blunt and fairly simple and could be said to be somewhat humanoid, at least compared to the prominent muzzle of most mammals. Megalonyx had a much deeper, wider skull than its tree-dwelling cousins, but its face was probably similar. It’s not hard to imagine that such an odd visage glimpsed in the late evening or in the gloom of a cave might create a much more humanoid impression.

The Tennessee beast is not the only potential surviving ground sloth. Legends from Brazil and Bolivia speak of the Mapinguari, a large red-furred jungle beast with thick, bullet-proof skin, massive claws, backward-facing feet, a single eye, and a large mouth in its stomach. While the more fanciful elements are difficult to explain scientifically- and may be nothing more than embellishments- the red fur and tough skin do match up with preserved pieces of ground sloth hide that have been found throughout South America. In addition to possessing reddish-brown hair, these samples also have ossicles- small disks of bone embedded in the dermis- that would have made the animal’s skin difficult to pierce.

Stories of another possible (though admittedly unlikely) population of surviving ground sloths comes from the far North. According to some cryptozoologists, various Indigenous peoples of the Yukon in Canada have legends of the Saytoechin or Beaver-Eater. This beast is described as being larger than a grizzly bear and possessing huge claws that it uses to rip open beaver dams in order to prey on the inhabitants. Admittedly, the connection between the Saytoechin to ground sloths is scanty.  The only reason the two are linked at all is because local people, when shown a book of prehistoric animals, picked out the large sloth Megatherium as resembling the Saytoechin. This cryptid’s carnivorous habits also cast doubt on its xenarthran (the taxonomic group that includes sloths, armadillos, and anteaters) identity. Even so, it is an intriguing bit of speculative mythology.

An article from Shukar Nation on the Saytoechin

A good article on Thomas Jefferson's study of Megalonyx fossils