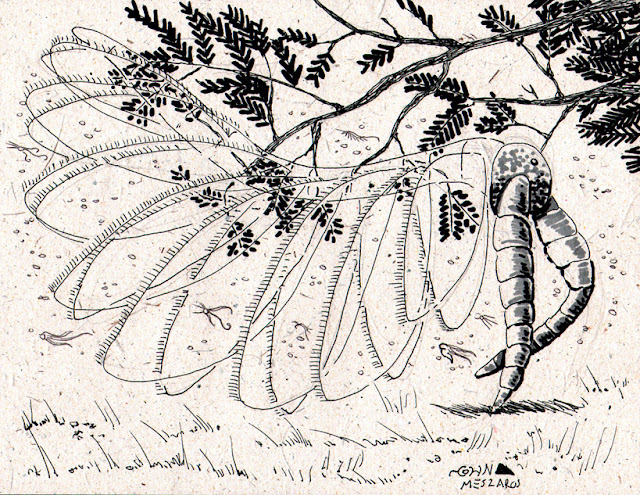 Here's another speculative variation on the California "wishbone" cryptid.

Anomalocarids were a taxonomic group of large marine predatory invertebrates of the Paleozoic. Though they have no direct descendants, fossil evidence indicates that they were close relatives of arthropods, tardigrades and a small phylum of animals known as onycophorans, or velvet worms.

Anomalocarids propelled themselves through the water using a series of lobes or fins along their sides that they waved in a sinuous motion rather like the wings of a stingray or the fins of a squid. The most distinctive feature of anomalocarids, however, was the pair of jointed Great Appendages that sprouted just in front of their mouths. In most species, these mandibles were adorned with sharp spines to help them capture and tear apart prey. Some of these creatures, however, developed into giant, gentle filter-feeders, using the elongated spines on their Great Appendages like strainers to catch plankton.


Anomalocarid fossils were for a long time only known from the Cambrian period- the earliest age of large, multicellular mobile animals. But the discovery in 2009 of Schinderhannes bartelsi in the Hunsrück Slate of Germany extended their range all the way to the Devonian.

I've long been a fan of anomalocarids, as you can probably tell from all the drawings I've done of them. Heck, I've even designed a couple speculative species, like this one here.


In an interesting instance of life imitating art, one of my speculative animals even "predicted" the discovery of one of the first known filter-feeding anomalocarids called Tamisiocaris. Here's a picture of my invented animal, Cetimimus barbus: 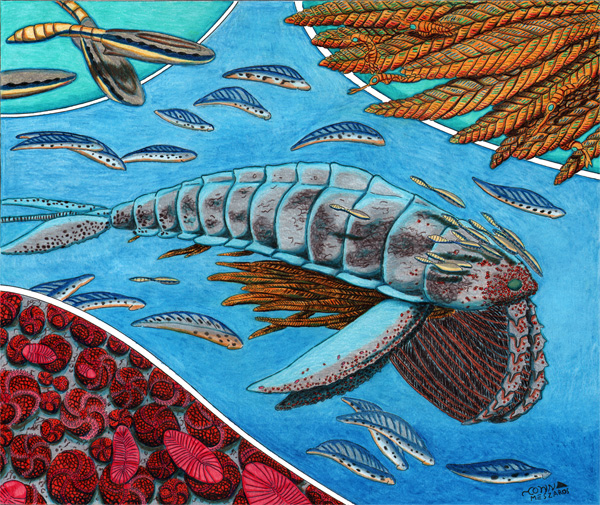 And here's a reconstruction of Tamisiocaris by Rob Nicholls: 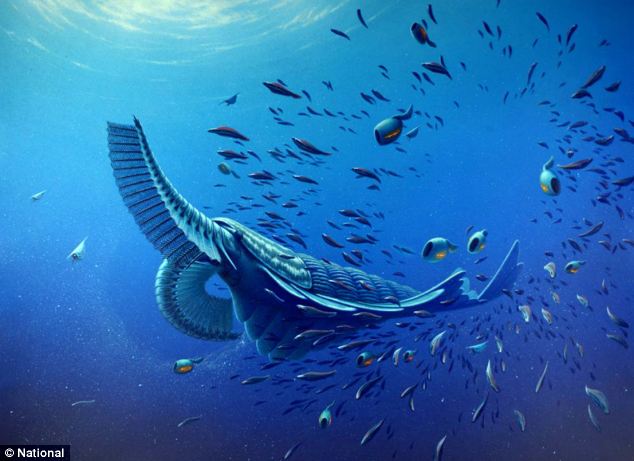 So, anyway, what's this got to do with the Fresno Nightcrawler? Well, while watching those two famous videos, I couldn't help noticing that the critter's legs looked a bit like anomalocarid Great Appendages (of course, when you've constantly got anomalocarids on the brain like me, it's not hard to see them everywhere). I started wondering: what if the weird "walking wishbone" we see is only a small part of a larger animal? What if the rest of it exists in another dimension we can't perceive? Perhaps the walking "legs" are actually modified mandibles that tow the animal along. Here I have imagined the creature's lateral swimming lobes having become huge flaps, forming a net or basket for capturing "astral plankton" which floats all around us just a few dimensions away.

On a final note, this won't be the last time you see me interpret a cryptid as a sort of unusual anomalocarid. Stay tuned for more!

Posted by John Meszaros at 1:24 AM No comments: 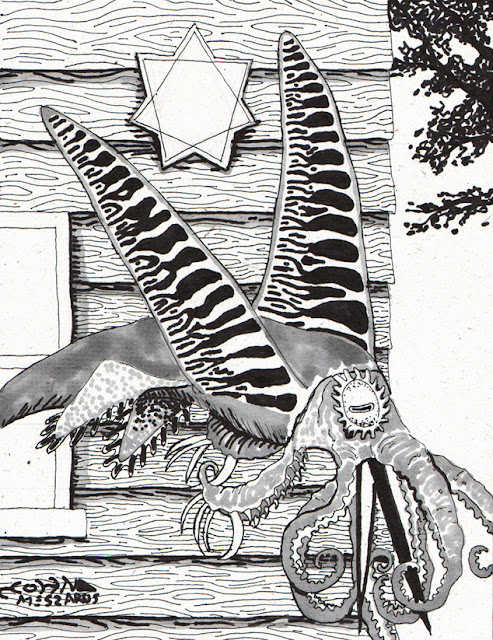 In the early 1700s, German settlers moved into Maryland from Pennsylvania, bringing with them many of their myths and legends. Among these were tales of the schnelle geister or “quick spirits”, supernatural beings that could sometimes be merely annoying-- knocking things over and creating bad smells-- and sometimes malevolent-- stealing children or forming huge battalions of writhing specters to rain down on helpless and unsuspecting humans.

As the Germanic legends merged with the larger melting pot of beliefs in Maryland, schnelle geister became snollygoster, then finally snallygaster, a general term for any sort of boogieman or mysterious creature.

In 1909, the term Snallygaster took on a distinct, terrifying form when the Middletown Valley Register of Frederick County reported that a huge, dragon-like creature had flown out of a cave in South Mountain and snatched up a local man, Bill Gifferson. The monster carried Grifeerson to the top of a hill where it pierced his throat with its needle-sharp beak and drank his blood.

Sightings of the Snallygaster exploded after this incident. Suddenly newspapers all over Frederick County, and even into nearby West Virginia, were overflowing with reports of terrifying run-ins with this blood-drinking dragon. Drawing on local folklore, the beast was quickly dubbed Snallygaster, though a few papers briefly gave it alternative, equally colorful names such as “Go-devil”, “Bovulopus”, “Octollopus” and “Gigantiloeutus”.

Descriptions of the creature varied, but most claimed that it resembled a winged reptile with iron claws and a pointed beak for draining its victims of blood. It was also said to have a single, enormous eye in the center of its forehead. A few stories claimed that it even had tentacles like an octopus-- though where these were located on its body or what it used them for was never specified.

Some tales claimed that seven pointed stars would drive off the beast, which allegedly led many in Frederick County and surrounding areas to place these symbols on the outside walls of their barns and houses. It is worth noting, though, that stars with four, five or six points were already common folk motifs on the houses of many German settlers (seven-pointed stars were rarer, but not unheard of), so this detail may have just been an embellishment playing off an already prominent decoration in the South Mountain area.

Snallygaster reports continued throughout 1909, gradually fading away by the end of the year.  The frenzy was finally capped off by a tongue-in-cheek letter to Middletown Valley Register written by an “expert” who claimed that the beast was of a species of monsters that lived deep within the Earth. The beast terrorizing Frederick County, so the writer claimed, had come to the surface after an earthquake opened a chasm in the South Mountains leading to its subterranean home. The article concluded with a report of a fictitious scientific expedition that had seen the creature fly back into its cave, at which point another earthquake sealed it up.

The Snallygaster resurfaced again in 1932 in a new flurry of newspaper reports. This time, though, the beast appeared to meet its demise when the Register reported that local prohibition agents had busted into a bootlegger’s hideout only to find the place abandoned and the partially-dissolved corpse of the Snallygaster floating in the moonshine mash where it had apparently fallen after being overcome by the alcoholic fumes.

Despite its apparent death, the Snallygaster would continue to make sporadic appearances in local papers over the years, even inspiring a 1976 article about a fictitious Hemmingway-style safari to track it down once and for all.

The bizarre appearance of the Snallygaster, along with its colorful, often outlandish history, bears more than a passing resemblance to many other tall tales of mysterious and deadly flying monsters heard throughout America- and indeed, throughout the world. This is no coincidence, for the Snallygaster began as a hoax created by the editors of the Middletown Valley Register to drum up sales for their paper. The story proved so popular that other papers picked it up, often embellishing the tale with their own details. Newspapers have a long history of punching up and sensationalizing stories-- or even creating stories whole cloth in the age before journalistic integrity- to attract and entertain readers.  Indeed, many old papers were more like the Weekly World News (or most internet message boards, to use a contemporary example) than a reputable source for information.

In more recent reports-particularly internet articles- the Snallygaster has developed an “archenemy” in the form of the Dwayyo, a black-furred biped sometimes described as being ape-like, sometimes said to be more like a werewolf or a dog walking on its hind legs. According to folklore, the Dwayyo will attack the Snallygaster on sight, though no explanation is given for this animosity. Nor is the mammalian beast itself given much of a backstory. The first reported sightings of the Dwayyo came in a series of 1965 articles in the Frederick News written by George May, which described a black, bigfoot-like monster terrorizing the county.

May’s articles may actually be responsible for the rivalry between the Dwayyo and the Snallygaster. One of his last articles suggested that increased sightings of the furred beast signalled the eclipsing of interest in Maryland’s other, draconic monster. His prediction, though, did not bear out since the Snallygaster has proven to be the far more popular creature.

Mythical monsters often serve as a metaphor for aspects of humanity. Sea serpents and krakens can represent our awe and fear of the ocean. Wendigo personify the terror and loneliness of the boreal woods and the desperation that leads to cannibalism. Elves, trolls, huldra and other fey beings symbolize the mystery and danger of the deep forest. The Snallygaster, too, once held a dark and potent symbolism-- specifically the evils of racism. Many of the early reports claimed that the beast specifically targeted African-American victims.

"In Maryland: A Guide to the Old Line State, the author directly alludes to such attitudes by stating:

“In the Middletown Valley section of western Maryland the fabulous ‘snallygaster’ flies into a little settlement of log cabins that served as slave quarters prior to the Civil War. The great bird preys upon Negro children out after dark, and on occasion has even been known to carry off a full-grown man to its lair in the near-by mountains.”

It is worth noting that these previous lines, specifically the phrases "preys upon," "after dark" and "carry off," are highly suggestive of the practice of lynching. In the contemporary period so-called "sunset towns" were declared wherein African Americans would be barred from entering after nightfall. Any "violators" would be sought out by lynch mobs, dragged to a secluded location and "dealt" with."

The symbolism behind a monster may change over time, of course. Vampires were once personifications of our fears of death, illness and, in the case of Stoker's Dracula, rape and sexually-transmitted diseases. Today they often symbolize a longing for immortality and the simultaneous fear of watching everyone and everything one loves crumble to dust around them.

The Snallygaster likewise has undergone an evolution in what it represents. Its association with racism and the evils of lynching has all but disappeared. Now the beast, like the Mothman, Thnuderbirds, Bigfoot and other cryptids, symbolizes the unexplored, a longing for mysteries and a fear and simultaneous desire for the unknown.

For my interpretation of the Snallygaster, I drew inspiration from descriptions of it as a one-eyed, tentacled dragon. However, rather than make it a reptile with cephalopod arms, I made it a flying squid with wings formed from the fin around its mantle. The hind legs are also extensions of the body fin with fringe-like papillae serving as “toes”. The front limbs of my version are actually highly modified tentacles with hooks sprouting from the tips of the suckers forming the “claws”.

The majority of information for this post came from an excellent book by Patrick Boyton called Snallygaster: The Lost Legend of Frederick County. It’s short, but thorough and definitely worth checking out.

Lumberwoods: The Snallygaster
Posted by John Meszaros at 8:17 PM 2 comments: