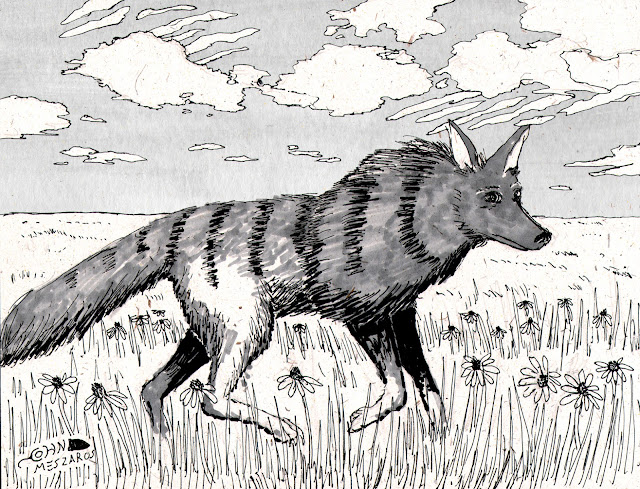 Until just a few thousand years ago there was considerably more megafauna diversity in North America than there is today. Most famous of these large Pleistocene mammals, of course, were the mammoths, mastodons and sabertooth cats. But there were many more, as well. Camels and horses. Giant ground sloths. American cheetahs (actually more closely related to pumas than African cheetahs). Hell pigs. A Shovel-tusked elephant called Amebelodon. Beavers as big as black bears. Muscular, bulky amphicyonids or bear-dogs (which were not canids proper, but may have been related to modern dogs). And dozens more. Sadly the majority of North America’s megafauna were killed off in the late Pleistocene by a combination of changing climate and competition with/hunting by humans.

But what if a few of these ancient beasts survived? Perhaps a small population of animals somewhere in the open prairies and shrublands of the West?

In 1886 Montana rancher Israel Ammon Hutchins shot an unusual wolf-like beast on his land. He gave the body to taxidermist Joseph Sherwood who mounted it and put it on display in his Idaho general store/museum. The animal, eventually dubbed the “Ringdocus”, was similar to a wolf but with a few striking differences. Its coat was tan with patches of black and faint dark stripes along the flanks and haunches. Its head was also narrower and more pointed than a wolf’s. Hutchins also claimed that the beast had humped shoulders like a hyena, though the stuffed body shows no sign of this feature.

Over time the stuffed Ringdocus became associated with a legendary beast of the Ioway people known as the Shunka Warak’in (according to writer and archaeologist Lance Foster, the final “n” is not pronounced, and serves simply to nasalize the “ee” sounds before it) which translates to “Carries Off Dogs” because of its alleged habit of killing and eating a tribe’s canines.

But what exactly was the Ringdocus/Shunka Warak’in that Hutchins shot? Was it an unusual-looking wolf? An unknown canine breed? Poor taxidermy? Or could it have been a representative of a heretofore thought extinct genus of Pleistocene mammals? Some cryptozoologists have speculated that it could have been a surviving dire wolf or Chasmaporthetes, the American hyena. Others have suggested that it may have been a relative of the Borophagus or “Bone-crushing Dog”- another dog-like mammal group unrelated to true canines.

Possession of the Ringdocus has been contested over the years. When Sherwood’s museum/store closed, its collection- including the mystery beast- was given to the Idaho Museum of Natural History in Pocatello, where most of it remained in storage. in 2007 the creature mount was tracked down by a man named Jack Kirby (unrelated to the famed comic book artist), who claims he is a direct descendant of Israel Hutchins and brought to the Madison Valley History Museum near Ennis, Montana. This was not without some protest from residents of Pocatello, who wanted the Ringdocus to remain in their city.

The obvious solution to figuring out the identity of the Ringdocus/Shunka Warak’in would be to perform a thorough scientific examination of the mount, including a DNA test. However, Kirby is reluctant to “ruin” his family’s 140-year old mystery by having it analyzed.  So, for now, the true nature of the Ringdocus must remain unknown.

On an interesting additional note, in a story for Paranormal Montana archaeologist Lance M. Foster mentions that while researching the sacred bundle system of the Ioway people, he came across papers from anthropologist Alanson Skinner detailing an item from the “Big Ioway War Bundle” that was referred to as a Hyena or “canka iwarawakya” skin (the latter should more accurately be spelled shunka iwarawakiya, according to Foster) which means “carrying off dogs”. Could this be more evidence of the mystery beasts lurking in the Western wilderness?

In 2009 Foster was interviewed for a student film project about the Ringdocus/ Shunka Warak'in which you can watch in full here.

Website of the Madison Valley History Associaton, which runs the Museum that currently houses the Ringdocus

Cryptozoology A to Z: The Encyclopedia of Loch Monsters, Sasquatch, Chupacabras, and Other Authentic Mysteries of Nature
by Loren Coleman and Jerome Clark