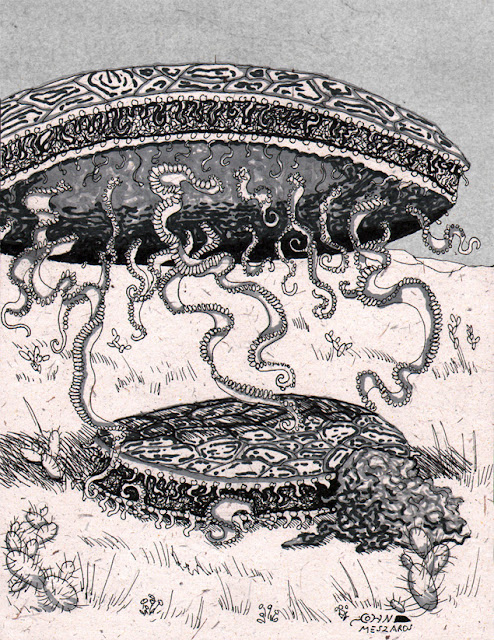 In popular culture UFOs are assumed to be artificial crafts piloted by extraterrestrial beings. But what if the truth of these anomalies is even weirder? What if they are themselves living creatures?

In the October 1959 issue of Flying Saucer magazine, a letter appeared from an anonymous reader- later claimed by various sources to be named Don Wood Jr.- detailing his encounter with a bizarre pair of otherworldly creatures on top of a Nevada mesa in 1925. According to Wood, he and three other men were flying a set of Curtiss JN-4 airplanes- commonly known as “Jennies”- over the desert. The men decided to touch down on top of a mesa to explore the landscape. They had not been on the ground long when a red disk, 8 feet in diameter, descended slowly from the sky. As the strange object touched down, Wood and his colleagues realized that it was some sort of animal. It appeared to be “breathing” by raising its top half up and down, creating a six-inch opening all along the rim in a manner that Wood likened to a clam opening and closing its shell. A large chunk had been bitten out of the creature’s side, and its body oozed a metallic-looking froth.  After about twenty minutes of rest, the animal began to glow bright red and attempted to float up into the air. Its injuries were apparently too severe, however, because it quickly sank back down.

As the stunned men watched the creature, a shadow fell over them. They looked up to find an even larger disk-shaped being floating down from the sky. This one ignored Wood and his companions as it settled over the injured creature and latched onto it with four sucker-tipped tentacles. In a burst of speed, the newcomer flew straight up with its smaller counterpart in tow and vanished into the sky. Whether the larger disk was helping or attempting to eat the other creature, Wood could not say.

The idea that UFOs could be living creatures, rather than extraterrestrial crafts, has been proposed by several paranormal researchers. Proponents of this theory point to the way many of these objects appear to dance around or chase each other in a manner akin to animals playing. Others have cited the appearance of “star jelly”- strange, apparently organic slime-  falling from the sky or being found on the ground after a flurry of UFO activity (I do need to point out, however, that many samples of star jelly have, in fact, turned out to be slime molds, colonies of Nostoc bacteria, bird vomit and other Earthly biological substances. So this line of evidence is rather dubious).

Author Trevor James Constable believed that many if not all, UFOs were actually gigantic, amoebae-like organisms that were normally invisible to the human eye. Using infrared photo filters, he claimed to have taken hundreds of pictures of these creatures completely filling the skies over Earth.*  Other people have also claimed to witness bizarre, organic-looking beings, collectively known as atmospheric beasts- drifting through the sky at high altitudes.

A fairly recent phenomenon may be further evidence of these supposed atmospheric beasts. Within the last few decades, several people have reported sighting what appear to be flying manta rays. The creatures are usually described as being flat gray and translucent, with large fin-like wings, but no discernible heads, tails or limbs. Are these creatures related to Woods’ flying clams? Are both perhaps part of an unseen aerial ecosystem existing miles above our heads much like the “air jungles” of Sir Arthur Conan Doyle’s short story The Horror of the Heights (which I’ve talked about before here)? 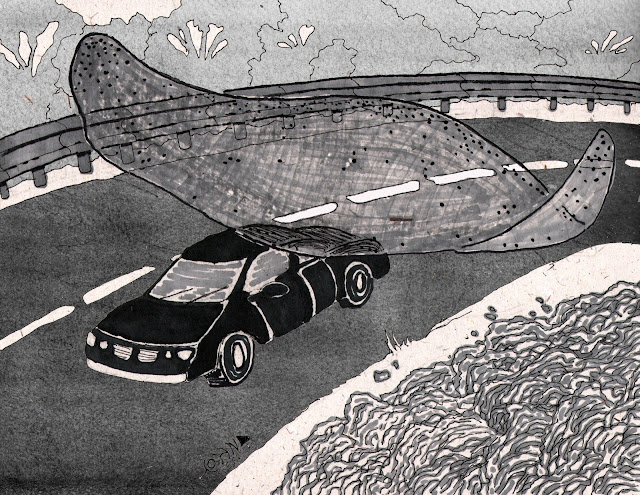 *On a personal note, I’m not a fan of Constable’s book, The Sky Creatures: Living UFOS. While some of his ideas are intriguing, he spends the vast majority of the book just ranting and raving about how the scientific establishment is “terrified” of his findings and are deliberately trying to ignore and discredit the truth that only he has discovered. Being scientifically minded myself, I find Constable’s constant railing against scientists to be obnoxious and juvenile. Plus it makes his book extremely tedious to read. After an hour I ended up just skimming the majority of the work to try to find the actual tidbits of info on biological UFOs scattered amid the endless diatribe.

A Cryptopia article on the creatures

A blog post about sightings of flying rays on phantomsandmonsters.com

Flying Saucers, The Magazine of Space Conquest, Issue no. 26, October 1959

Posted by John Meszaros at 6:48 PM No comments: