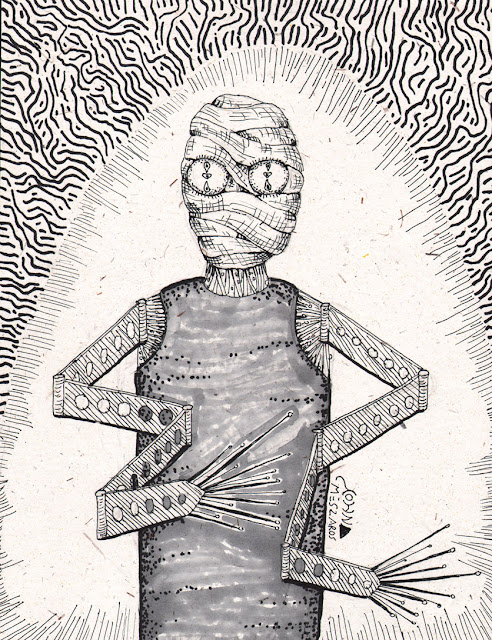 Late at night on August 26th, 1975, Sandra Larson, her boyfriend and her daughter, Jackie, were driving to Bismarck, North Dakota when a collection of rumbling, orange orbs descended from the sky and approached their car. Suddenly all three reported a strange feeling of being "stuck", as if frozen in ice. Suddenly Sandra, who had been driving, was sitting in the backseat while her daughter had moved to the front. Feeling disoriented, the group pulled over at a gas station only to discover that they were missing a whole hour of time.

Later Sandra and Jackie would undergo hypnosis by psychologist R. Leo Sprinkle of the University of Wyoming. Sandra would recall being levitated towards one of the UFOs, where she was given a medical exam by a bizarre being. According to her, the creature had large, bulging eyes that stared out of a head covered in wrappings "like a mummy". It's arms were made out of jointed strips of metal like a Meccano set (a metal toy-building kit similar to an Erector set). It's body was covered in what she described as "brown vinyl".

The being performed several strange experiments on her, such as rubbing a clear liquid on her body and taking a painful scrapping of the inside of her nose with an instrument. At one point Sandra even felt as if her brain had been removed from her skull.

In later hypnosis sessions with Sprinkle, Sandra would recall being visited by this being and its fellows earlier in her life, including several instances where she was levitated through solid walls.

This bizarre case occupies a unique point in the history of UFO research. Since its inception, the field of ufology has been divided into two camps- those who try to examine the phenomenon of UFOs and alleged alien encounters from a scientific perspective, and those who approach it from a more spiritual or psychological angle. Scientific investigators tried to study these cases as either genuine visitations by extraterrestrial entities or as hallucinations caused by sleep paralysis, hypnogogia or misidentification of natural phenomena. Those looking at the phenomenon spiritually and psychologically focus on the perceptions and feelings of the abductees themselves. Some perceive the encounters as a sort of New Age communion with higher beings. Others see them as mental constructs that the abductees have created to deal with trauma and other emotionally-charged experiences.  The Sandra Larson case was one of the first to be examined by both camps and would eventually lead to a partial melding of the two groups which has continued into the modern era of UFO investigations.

The Big Book of UFOS by Chris A. Rutkowksi.

An article from Week in Weird on Abductions and Hypnosis

A chronology of UFO incidents

HowStuffWorks article on the encounter

The Curse of the Space Mummies

Posted by John Meszaros at 3:39 PM No comments: