Why so long between posts?

So it's been quite a gap between my latest post on the Loveland Frogs and my last post about Sharlie. A little over five months. I know I am rather sporadic in my updates to Cryptids State-by-State, but why such a sudden, long hiatus?

The big reason is that I was putting all my creative energy into finishing up a major art project. For the past year (well, two years really, but I didn't get serious until July 2018) I've been writing and illustrating a picture book! 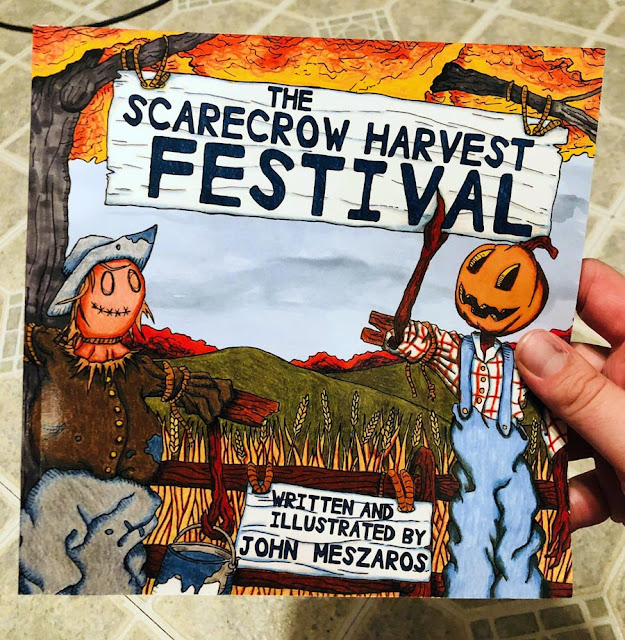 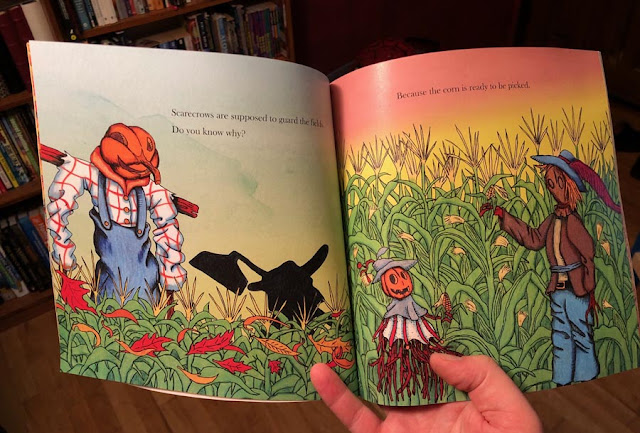 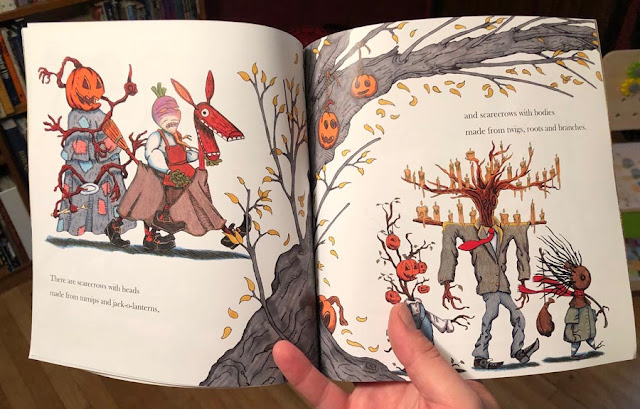 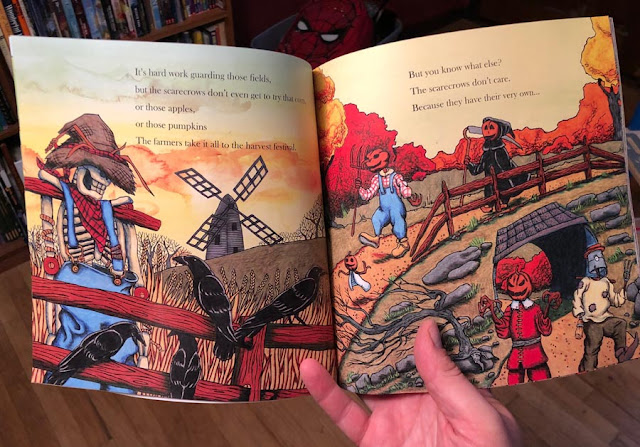 I began writing The Scarecrow Harvest Festival as a gift for my son, who loves scarecrows and autumn festivals. Autumn is also my favorite season, so it was a perfect opportunity to immerse myself in a creative world of pumpkins, fallen leaves and chilly evenings (something I miss even more on these summer heatwave nights). The last month I've been working extra hard to get everything formatted for printing. I'm currently publishing my book independently through Amazon's KDP services, but I'm actively seeking out publishers to get it professionally distributed. If you'd like your own copy you can get it here!

Now that this big project is finally complete,  I can devote more of my energy towards my other art projects, particularly this blog.  I'm aiming to post more frequently- I'd like to get it up to at least once a month. And once every state has their very own official unofficial cryptid, I'm going to compile everything into a book with lots of new material. So stay tuned!
Posted by John Meszaros at 4:54 AM 1 comment: 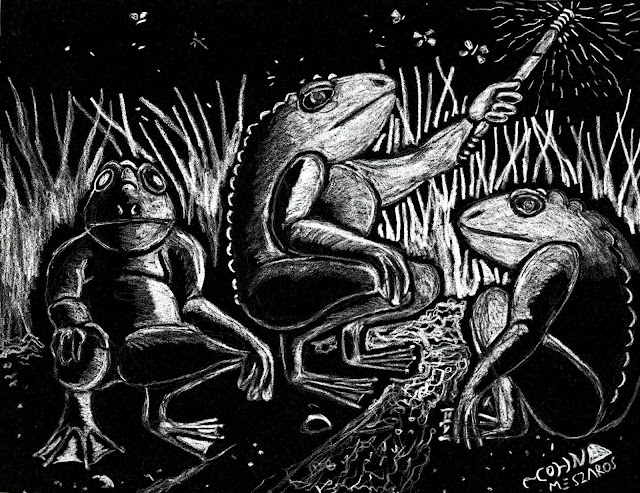 Millions of years ago, in the Carboniferous period, the land that would become Ohio was a hot, muggy swamp home to a variety of giant amphibious beasts such as the giant salamander-croc Stegops, the boomerang-headed Platyrhinops, the sinuous, eel-like Diceratosaurus, and many more. Is it possible some of these creatures survived into the modern day, evolving over the eons into bipedal humanoids lurking in remote waterways like the Creature from the Black Lagoon? Well, no. Probably not. But that would make a pretty great backstory for Ohio’s favorite legendary creatures, the Loveland Frogs.

The story of the Frogs began in the summer of 1955 when a businessman driving through Clermont County saw three batrachian beings huddled together on the side of the road. When he got out of his car and approached the creatures, one of them raised a spark-emitting wand that scared him away.
The Loveland Frogs did not reappear again until 1972 when police officer Ray Shockey saw what he initially thought was a dog lying in the middle of the road. As he stepped closer, the animal stood up on its hind legs- revealing itself to be more amphibious than canine- and quickly hopped over a guardrail. A few weeks later another officer, Mark Matthews, sighted another of the strange creatures resting by the side of the road.

The Frogs disappeared into folklore for several decades until 2016 when two teenagers claimed to have encountered one while they were playing Pokemon Go! near Lake Isabelle. Pictures taken by one of the witnesses show a wide-mouthed creature with eerily glowing eyes half-submerged in the waters of the lake (as a huge Dungeons & Dragons nerd, I can’t help comparing the photo to the Blindheim, a weird frog-like, cave-dwelling, luminous-eyed being from the classic Fiend Folio tome).

A recent article, however, suggests that the beast in the photo may be nothing more than a lawn decoration with light-up eyes. A hoax, most likely, but one made in the spirit of keeping the legend of the Loveland Frogs alive.

There is quite a fondness for the Frogs in the Loveland area, so much so that the critter even got its own bluegrass musical called “Hot Damn! It’s the Loveland Frog!”

Ohio is not the only part of the Midwest with its own frog-humanoids, though. In 1951, Indiana steelworker and entrepreneurial advertiser Harrison Bailey had a close encounter with several odd batrachian beasts.  Bailey’s unique brand of advertising involved painting clients’ slogans on a large tractor wheel and rolling it by hand down a length of highway, where the eye-catching oddity would be seen by hundreds of people. While rolling his tire along Illinois Highway 7 one day, Bailey encountered an oval, silver object piloted by two beings wearing green masks. The entities allegedly paralyzed Bailey somehow and asked him where he was going and what he was doing. Once Bailey answered, they released him and allowed him to continue on his way. But when he walked away, he discovered that several hours had passed, though he had no memory of the missing time. Bailey did not talk about the incident for 25 years until he underwent hypnosis therapy to figure out what happened in the forgotten hours after he encountered the craft. Bailey recalled being suddenly swarmed and chased by a pack of foot-long humanoid frogs, accompanied by an entourage of tiny, hard-shelled “bugs”. The creatures herded him towards the craft and the green-masked beings who, in addition to the asking him where he was going, also told him that there were extraterrestrial beings living among humanity and that they wished to establish peaceful communication with Earth.

Could the weird tiny frog-creatures that Bailey encountered be related to the Loveland Frogs? Are there secret populations of intelligent, possibly extraterrestrial, amphibians lurking in hidden places throughout the Midwest? Again, probably not. But I think that bit of folklore, like the idea of Carboniferous amphibians surviving to the present day, would make a pretty fitting addition to the legend of Loveland’s bipedal, wand-wielding amphibious cryptids.

An article from the Cincy Weekend about the Loveland Frogs

An entry from Weird U.S. about the Loveland Frogs

Hot Damn! It's the Loveland Frog!

An article from Skeptiod.com about the Loveland Frog

An article from Bogleech.com about the Blindheim, a Dungeons & Dragons beast somewhat similar to the Loveland Frog.


The Field Guide to Extraterrestrials by Patrick Huyghe
Posted by John Meszaros at 1:48 AM No comments: