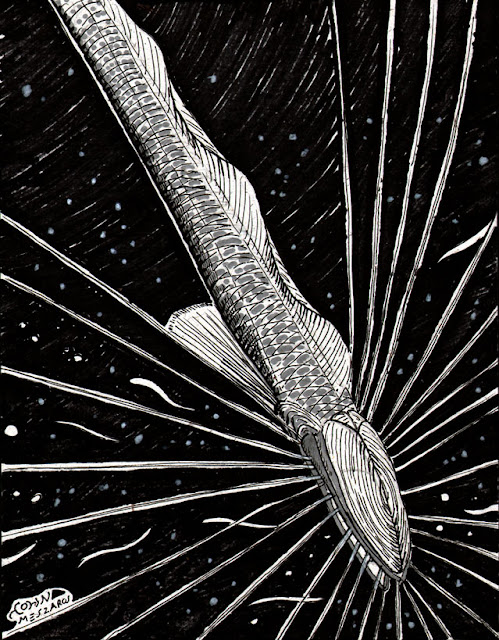 In June of 1996, a bizarre carcass was caught in a fisherman's net along the coast of Block Island, a popular tourist retreat off the coast of Rhode Island.  The badly decayed creature was little more than an articulated spinal column and a long, spear-like head with fleshy whiskers. The beast attracted quite a lot of attention, as weird things coming up out of the sea tend to do.

One of the curious onlookers was New York state park biologist Lee Scott.  In order to determine what the monster was, Scott took it back to his cabin and put it in a freezer, intending to send it to the National Marine Fisheries Service on the mainland for examination.

As you can probably already guess, the carcass was stolen and has not been seen since. Eventually some locals called up to say they had kidnapped the monster to prevent it from being taken off island. Despite it's disappearance, the monster continued to generate interest on the island, leading to a few entrepreneurs printing up t-shirts, posters, and other souvenirs.

So what was the Block Island Monster?  Most likely a dead basking shark.

These fish have massive mouths that they use to filter plankton from the water using combs on their gills. The bottom jaw of the shark is attached by relatively thin muscles, so when the animal dies this part quickly rot and fall away (the "whiskers" of the Monster are the badly-decayed remains of these muscles).  What is left is a long, narrow skull attached to what appears to be a long "neck" and a finned body.  As you can imagine from that description, basking shark carcasses have frequently been mistaken for the bodies of plesiosaurs and other sea serpents. A particularly famous example is the Zuiyo-maru carcass pulled from waters around New Zealand by a Japanese fishing trawler in 1977.
Though the identity of the Block Island Monster is pretty straightforward, I wanted to have a little fun with the idea.  Instead of being a shark, I imagined the creature as a giant relative of the deep sea fish Ipnops murrayi. Ipnops is notable for its eyes which have been highly modified into bizarre, plate-like structures that may either be used to detect the faintest trace of bioluminescence in the abyss, or may actually be luminescent lures themselves.  In the case of the Block Island Monster, these plate-eyes are indeed used to spot the lights of its prey in the dark.  The creature also possesses a "beard" of long filaments around its mouth for detecting movement.  The monster typically swims head-downward with its whiskers spread out around it, searching for the slightest disturbance in the water.