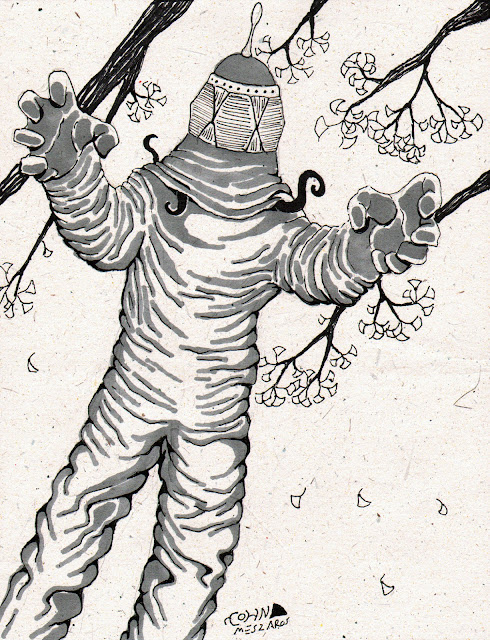 On the evening of October 17, 1973, Falkville Alabama chief of police Jeff Greenhaw received a call from an anonymous woman claiming she had seen a UFO sail over her house and land in a nearby field. Though hesitant to go out when he was already off duty, Chief Greenhaw got in his car to have a look. When he arrived at the field no UFO could be found, so he decided to drive around the area to see if there was anything in the area.

While cruising down a dirt path, Greenhaw spotted a person standing on the side of the road. Thinking it might be someone in need of help, he got out and approached the figure. Up close, however, he discovered that the being was completely covered by some sort of metallic outfit. To quote Greenshaw himself:

“It looked like his head and neck were kind of made together... He was real bright, something like rubbing mercury on nickel, but just as smooth as glass. Different angles give different lighting.... When I saw him standing in the middle of the road I immediately stopped the car and asked if he was a foreigner, but no sound came out of his mouth.”

Thinking quickly, Greenshaw ran back to his truck, grabbed his camera and snapped several photographs of the creature before it ran off into the night at speeds supposedly faster than a normal human could go.

And what exactly do Greenshaw’s photos depict? Well....

It’s pretty clear from this photo that the “alien” is nothing more than someone in a metallic asbestos or radiation suit. It is worth noting that this sighting came only a few days after the more famous alien encounter along the Pascagoula River in Mississippi detailed in the previous entry. Perhaps this “encounter” was staged in an attempt to ride on the fame of the mummy-robot story.

The question, though, is whether Greenshaw was in on the hoax or just an innocent bystander.  If the former, his participation in the events brought him nothing but misfortune. His report on the encounter was widely ridiculed and eventually led to his job as chief of police being terminated. Whether or not Greenshaw knew the being was just a prank, that ending seems rather harsh.
Let’s imagine for a moment, though, that the Metal Man actually WAS a genuine extraterrestrial (or perhaps extradimensional) entity. Could the metallic exterior have been a space suit for an entity that was not used to Earth’s atmosphere? Or is the creature’s similarity to the Pascagoula mummy-robots more than superficial? Could it also have been some sort of synthetic being? Perhaps a slightly different model of the Pascagoula creatures? Maybe it was a probe sent out to explore an environment its creators could not? Greenshaw  does describe the being as having stiff, robot-like movements.
Encounters with other apparently mechanical alien beings have been reported on multiple occasions. These creatures come in a surprising variety of shapes. 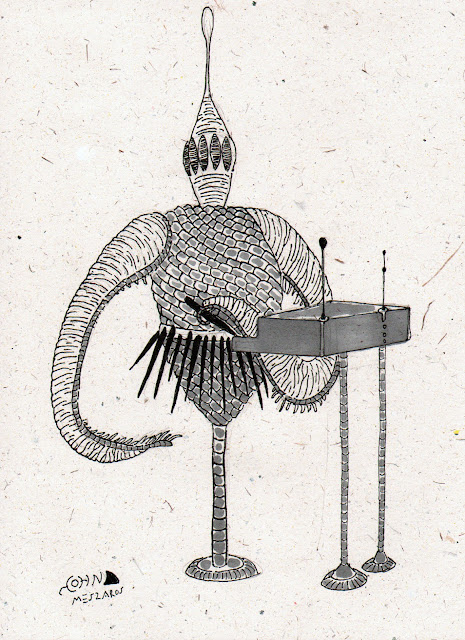 For example, in 1977, Antonia La Rubia of Paciencia, Brazil reported being abducted on his way to work by beings with metallic scales and tentacle-like arms. Each entity stood upon a single leg with a flared base that La Rubia described as looking like the base of a barstool. Each creature also carried a belt of syringe-like instruments. One of the beings used a syringe to zap La Rubia with a blue light and carry him into a waiting space ship. Inside, the robots used a piano-like device to show him a series of images, some of them depicting himself being examined by blue lights from their instruments (though La Rubia’s account makes no mention of him actually being examined. Perhaps those memories were removed by the robots?).  They also drew some of his blood before returning him to Earth. 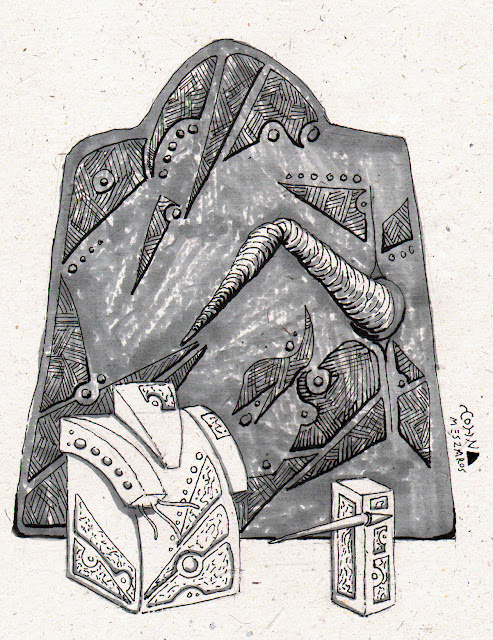 Another 1977 encounter with apparently robotic beings occurred in Prospect, Kentucky. While driving home one night Lee Parish spotted a rectangular craft hovering in the sky. When he finally arrived home he discovered a half hour gap missing from his memory. Under hypnosis Parish recalled being brought aboard the strange craft where he was confronted by three blocky, mechanical creatures. The largest being resembled a “tombstone” and had a single jointed arm jutting out of it. Another, shorter being was pure white with a rough “head” and arms that did not move. Though the beings never spoke, Parish got the impression that this one was somehow the leader. The smallest being was bright red and had a single, unjointed limb projecting from it.

The red and black machine-creatures examined Parish (the black one apparently causing a painful cold, burning feeling when it’s limb contacted him) while the white being observed. Once the machines were done with their examination they merged with one another and vanished, at which point Parish was returned to his car. 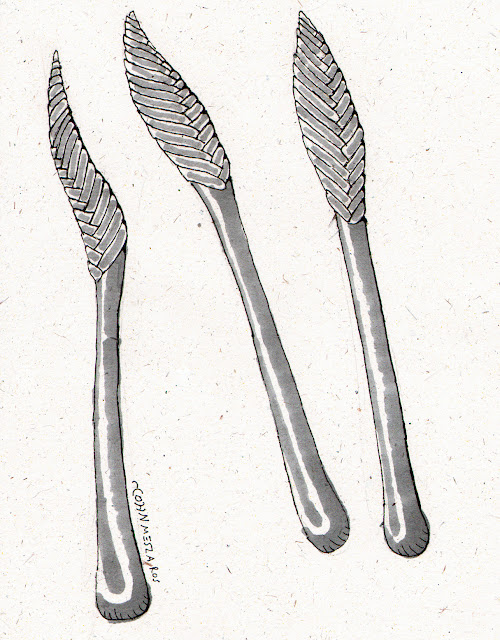 Yet another strange encounter with mechanical aliens occurred in 1951 over the skies of Georgia. Pilot Fred Reagan was flying his plane when he was sucked upwards by an unknown force and crashed into a lozenge-shaped UFO. Reagan immediately found himself teleported inside the craft, where he was met by three foot tall metal aliens that he described as looking like asparagus stalks.
The beings apologized for the crash and gave him a medical exam to make sure he was not injured.  During the procedure, so Reagan claims, they found cancer within his body and removed it as an apology for the trouble they had caused. The robots then deposited him safely in a field next to the wreckage of his plane. On an unnerving side note, Reagan died less than a year later due to brain tissue damage which was believed to have been caused by exposure to high levels of radiation.

This variety of unusual robotic beings raises some interesting speculative questions. Is each type sent out by a different alien species? Or is it possible that there is just one investigating alien species and each variety of robot is simply a different design used for a specific purposes that the humans do not comprehend?

Cryptopia article on the Metal Man

True Tales of the Unexplained article on the Metal Man

A report on the Prospect Mechanical Monoliths

A report on the La Rubia Barstool Robots

Posted by John Meszaros at 10:28 PM No comments:

My Writing in Cryptid Culture! 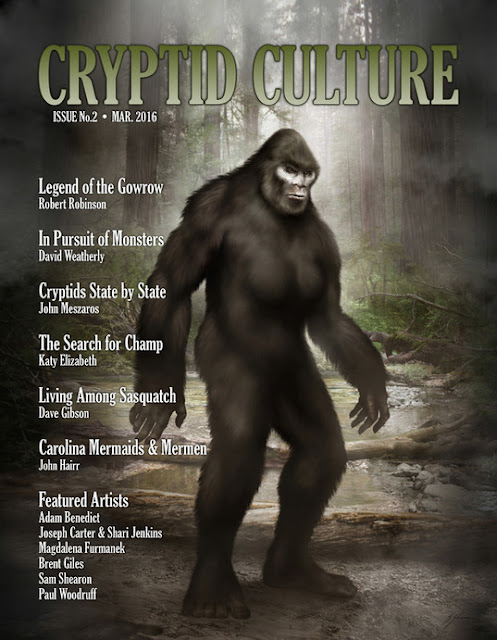 Hey everyone, I recently wrote an article for Cryptid Culture magazine talking about my blog.

To quote the magazine's own blurb:

"Cryptid Culture Magazine is a new print publication based on Long Island, NY. The idea for this magazine began in early 2015 when Brian Richardson, founder and designer for Mythic Articulations, came up with the idea of an art magazine that could gather all of the 'cryptid art' and artists he was discovering through his company.  Expanding that, we began to believe there might be an audience for such a magazine if it could include not only visual art but fiction, essays, poetry etc. as well as content covering the influence of cryptids on books, film, TV, gaming, fashion, social media and science; really anything that might fall under the purview of 'cryptid culture' including interviews with cryptozoologists.

We envision Cryptid Culture as being a celebration of all things cryptid. We would like to include sightings, accounts and theories, remaining respectful of all opinions and insights from contributors with our own slant falling on neither the skeptic or believer side but promoting the interests of both with the dignity and respect each deserves.  We will strive to make Cryptid Culture a high quality magazine with beautiful design and intriguing content and we would love to have you be a part of it."

You can pick up an issue: www.cryptidculture.com
Posted by John Meszaros at 7:50 PM No comments: 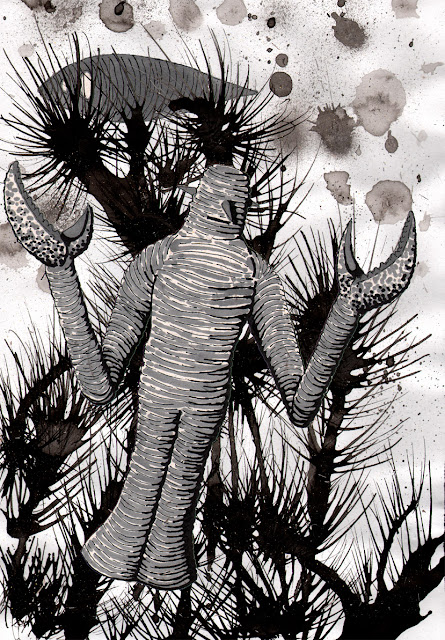 On the cool evening of October 11th, 1973, Charles Hickson and his friend Calvin Parker, Jr. were fishing off a pier on the Pascagoula River. As they watched, a football-shaped, glowing craft zipped down from the sky and hovered over the river. Three bizarre beings floated out of the ship and approached the men. Hickson described the extraterrestrials as “robots” with wrinkled gray skin like an elephant’s, and claw-like hands. Their bullet-shaped heads had no necks, instead merging seamlessly into their shoulders. The creatures had slits for mouths and carrot-like growths where their noses and ears wouldhave be. They did not appear to have any eyes. Their cylindrical legs appeared to be welded together.

The alien robots somehow paralyzed Hickson and Parker and took them back to their ship. There, the men were floated into a bright, empty room and scanned by a football-shaped mechanical eye. According to Hickson, Parker quickly passed out during the encounter. Years later, under hypnosis, he would recall seeing shadowy beings watching the procedure from another compartment. Perhaps these were the creators and controllers of the wrinkled robots.

After a short while, both men were returned to the pier.  Once able to move again, they ran to their car and sat for a long time, regaining their composure.

So what exactly happened to Hickson and Parker that night on the Pascagoula River? Were they indeed paralyzed by wrinkled robots and taken about a spacecraft? Were the beings from another planet? Another dimension (perhaps the same higher dimension that was the possible home of the Van Meter Visitor and other bizarre phantoms)?

Or was the whole encounter a vivid, terrifying hallucination? Joe Nickell, Ph.D., a Senior Research Fellow of the Committee for Skeptical Inquiry (CSA) wrote an interesting article for the May/June 2012 issue of Skeptical Inquirer magazine which postulates that Hickson may have actually experienced a hypnagogic episode.

Hypnagogia is the state between waking and sleeping where some people can experience vivid, dream-like hallucinations, often including strange lights and visions of frightening beings. Many  people also report sleep paralysis during this time-- a condition caused by the body being in “sleep mode”, though the mind is still partially active.

Hallucinations and sleep paralysis, so Nickell hypothesizes, might explain the bizarre appearance of the wrinkled robots, as well as the way they paralyzed the two men. Parker, as was mentioned before, fell asleep at the beginning of the alleged encounter and did not wake up until afterwards. He only recalled details of the incident later. Perhaps his "recovered memories" were influenced by Hickson’s own genuine belief in the encounter.

Hypnogogic hallucination it may have been, but regardless the experience still haunted the men for years afterwards. Both suffered mental trauma from what they believed they saw. Parker was supposedly even hospitalized at one point after an emotional breakdown.

In an interesting possible sequel to this encounter, just six days later a metallic, wrinkly, robot-like being somewhat similar to the Pascagoula aliens was reported in Falkville, Alabama. I'll be detailing that incident in my next entry.

A detailed account of the Pascagoula Abduction on Cryptopia

A Bogleech.com article on the Pascagoula Aliens and other non-Gray extraterrestrials
Posted by John Meszaros at 10:53 PM No comments: