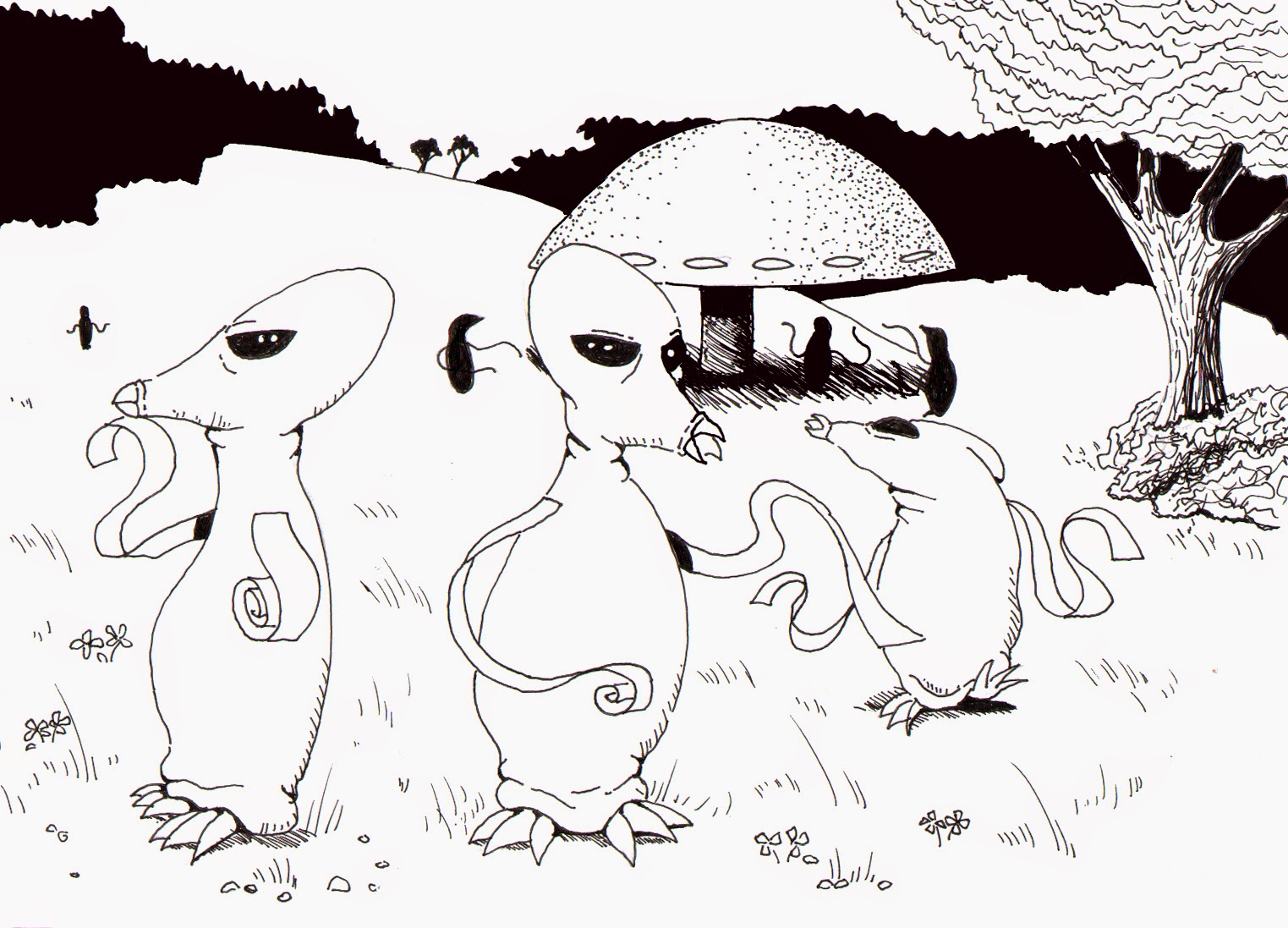 On February 14, 1967, farmer Claude Edwards of Tuscumbia, Missouri stepped out of his house to find a giant, metallic gray-green mushroom standing in his field.  As he approached the object, he noticed several three-foot tall figures waddling around the structure.  Moving closer, he saw that the strange beings were the same dark olive green as the mushroom-shaped structure-- which Edwards was now convinced was some sort of space craft. The beings had large black eyes-- or possibly goggles.  Edwards wasn't quite sure.  They also had black coverings over their snouts-- though whether these were parts of their bodies, or some type of breathing apparatus isn't clear.

He also saw that the mushroom-craft had a row of windows or lights along its base that oscillated in a myriad of colors.

Edwards watched the creatures trundle about under their craft for a while, swinging their arms all over.  Eventually he grabbed two rocks, intending to use them to punch a hole through the craft to prevent it taking off.  However before he could get too close he struck some sort of invisible force field around the penguins and their ship.  Edwards flung his rocks anyway.  One bounced off the invisible wall, while the second skidded over the top of the mushroom ship and landed on the ground behind it.  The farmer's aggressive behavior apparently startled the little green creatures enough that they retreated into the "stalk" of their craft and quietly floated up into the sky.

Edwards never gives a clear description of what the space penguins' arms looked like.  However, using his original sketch of the creatures as a guide, I've taken a little artistic license and given them flat, hand-less ribbon-like limbs.

Posted by John Meszaros at 12:14 AM No comments: 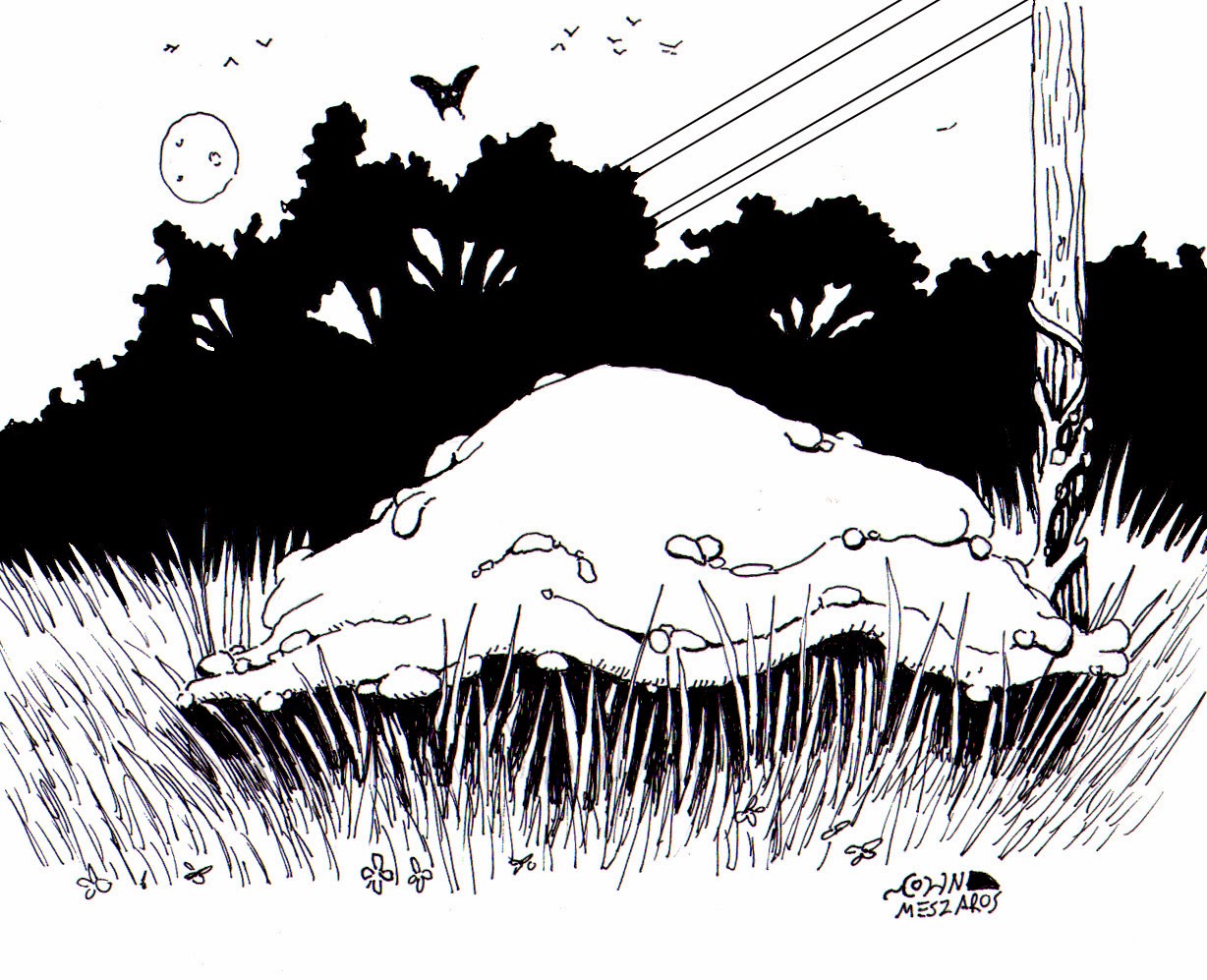 Most paranormal researchers assume that UFOs are spacecraft piloted by beings from other planets or even other dimensions.  A few investigators, however, have postulated that these strange objects may actually be living creatures-- another type of Atmospheric Beast like the unknown entities that may produce star jelly (which I mentioned briefly in the Crawfordsville Monster entry).

One intriguing incident which may support this view happened in Septemnber, 1950.  Two Philadelphia police officers, Joe Keenan and John Collins, spotted a glowing mass drifting towards the ground in an open field.  Upon reaching the touch-down site, the officers reported finding a six-foot wide domed mound of what appeared to be purple jelly, so light that it barely even bent the stalks of the weeds it had landed on. The mound was faintly luminescent and appeared to pulse faintly like a living thing.  According to some reports, part of the thing had even begun to crawl up a nearby telephone pole.

Keenan and Collins called for backup and once the other men had arrived, all four decided to try to move the thing.  Collins, however, found that when touched, pieces of the glob broke off like foam and quickly evaporated, leaving behind an odorless, sticky residue on his hands.  Over the course of the next half hour, the glowing purple glob slowing dissolved until nothing was left to mark its brief existence.

The story of the Philadelphia glob doesn't end there, though.  Seven years later movie producer Jack H. Harris tasked his friend Irvine Millgate with coming up for an idea for a marketable film.  This being the 1950s, science fiction monster movies were huge.  So Millgate used the Philadelphia Glob incident as the basis for a story of a malignant extraterrestrial jelly-monster that terrorizes a town in Pennsylvania.   Originally intended only as a cheesy B-movie to make a little cash, Millgate and Harris' film, 1958's The Blob, became a hit and helped start the career of its star, Steve McQueen.


Not to mention creating a pretty catchy earworm:

Posted by John Meszaros at 10:48 PM No comments: 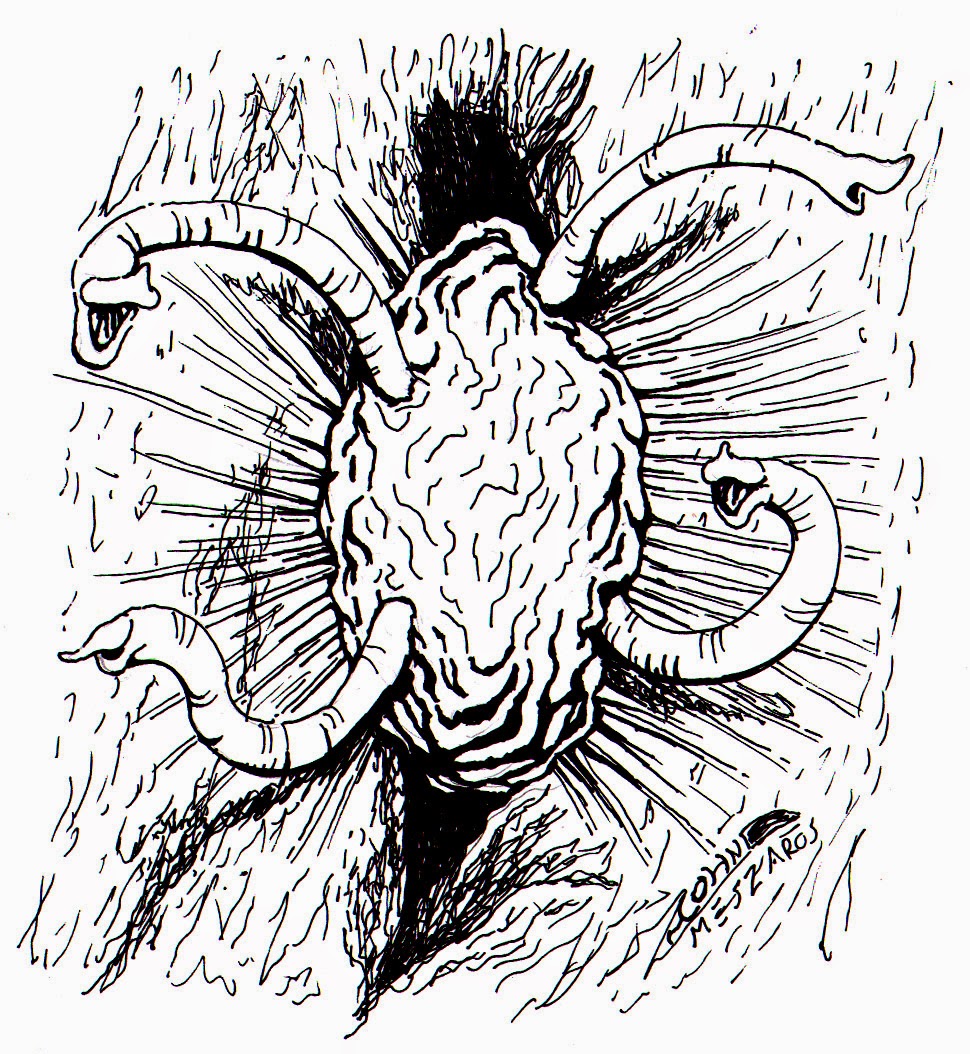 In 2009, sanitation workers running a camera through a private sewage system came across a colony of strange, red blobs that throbbed and shuddered like living things.  Video of the sewer things got pretty huge on Youtube, with all the usual wild guessing.

So what were these things, exactly?  It turns out they were nothing more than colonies of Tubifex worms.  These worms normally live in sediment at the bottoms of lakes or, as happened here, in sewers.  Since there was no soil for the worms to burrow into, they were simply coiled around each other, forming the odd, lumpy balls.  When the hot camera lights got too close, the worms would collectively retract, creating the illusion of a single large moving being.  Apparently these colonies are fairly well known to sewer workers, who have given themt he delightful nickname "ass urchins".

Tubifex are pretty interesting animals.  They're annelids, a large, successful group that includes earthworms and leeches.  Tubifex often live in polluted, or low-oxygen sediments-- such as the aforementioned lake bottoms and sewers.  To get oxygen in such inhospitable environments, they have tons of hemoglobin in their bodies, which gives them their bright red color.  You can learn everything you'd ever want to know about Tubifex worms here.

For this drawing, I added a couple of large "queen tubifex" heads coming out of the mound like hydra heads.  There's no report of the ass urchins sprouting giant heads, but then again there aren't any reports that say they DON'T sprout giant heads.  Besides, how could I not include a depiction of a tubifex's adorably doofy face
Posted by John Meszaros at 11:05 PM No comments: 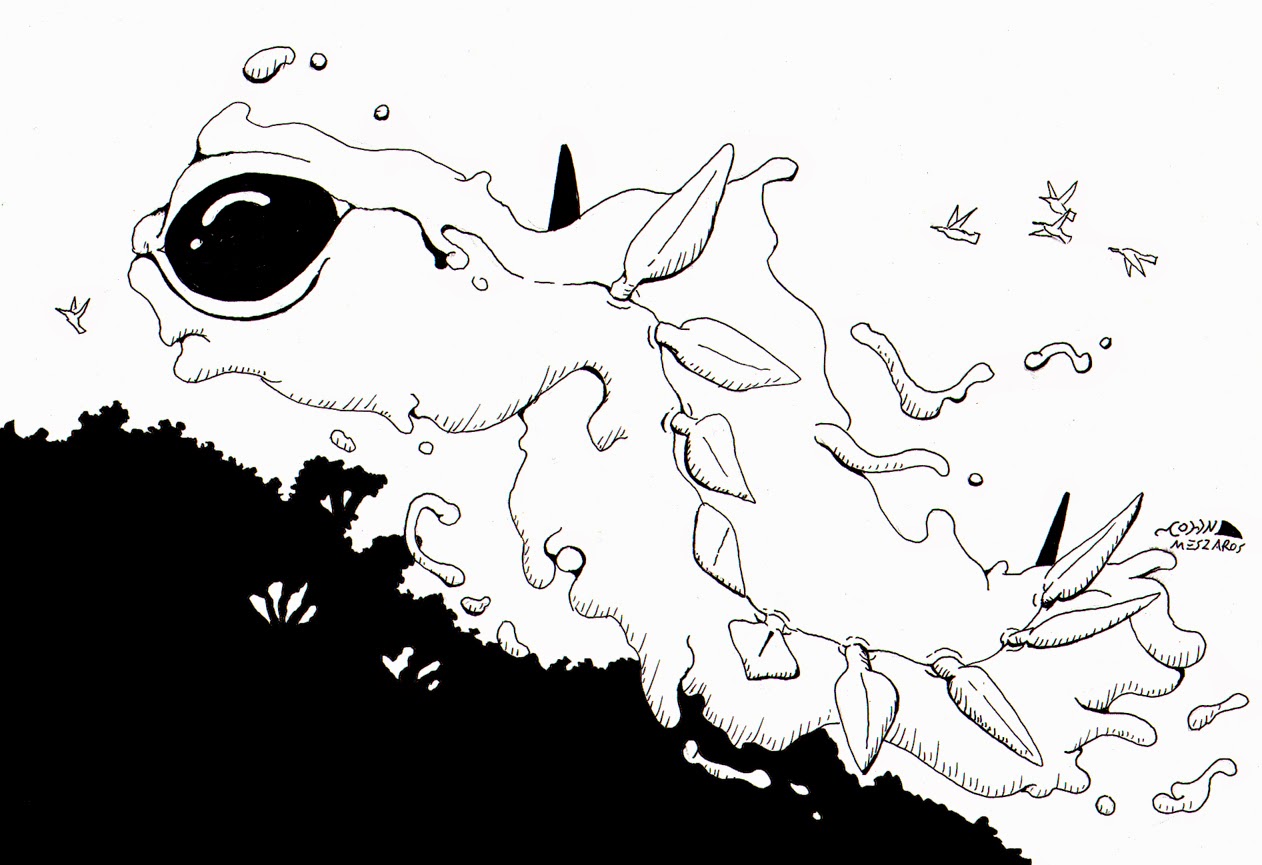 This odd critter is classified among an obscure group of cryptids known as "atmospheric beasts".  These are beings that supposedly live high up in the atmosphere, within or above the clouds.  They come in many different forms-- jellyfish, ribbons, giant amoebae.  Some cryptozoologists even speculate that UFOs, rather than being spacecraft from other worlds, might actually be bizarre airborne life forms that either evolved here on Earth or migrated to our planet from elsewhere.

Sometimes when a meteor strikes Earth, it will be accompanied by an odd, slimy blob of tissue called "star jelly" which some believe may be the remains of atmospheric beasts struck by the falling stone.  There are cases, though, where the supposed star jelly turned out to be a colony of a perfectly natural terrestrial cyanobacteria called Nostoc or one of the many varieties of slime molds (colonial organisms which are fascinating in their own right).

On an interesting side note, Sir Arthur Conan Doyle, creator of Sherlock Holmes, wrote a short story, "The Horror of the Heights", which describes an aviators encounters with "air jungles" full of weird, translucent airborne monsters.
You can read the full story here

Anyway, about this Crawfordsville Monster.  In the early morning of September 5th, 1891, two ice delivery men, Marshal McIntyre and Bill Gray saw a bizarre creature diving and curling through the sky.  The Crawfordsville Journal later described it as:

about eighteen feet long and eight feet wide and moved rapidly through the air by means of several pairs of side fins. . . . It was pure white and had no definite shape or form, resembling somewhat a great white shroud fitted with propelling fins. There was no tail or head visible but there was one great flaming eye, and a sort of a wheezing plaintive sound was emitted from a mouth which was invisible. It flapped like a flag in the winds as it came on and frequently gave a great squirm as though suffering unutterable agony."

The creature was later seen by pastor G.W. Switzer, whose description was similar to the Journal's report.

Eventually, the nature of the monster was discovered when two witnesses, John Hornbeck and Abe Hernley followed it and discovered that it was..... nothing but a huge flock of kildeer. Apparently the shape of the massive cloud of birds that been misinterpreted due to the dim lighting and the fogginess of the early morning.

Like a lot of cryptids, the Crawfordsville Monster turned out to be a perfectly normal, known phenomenon distorted by human perception.  But even so, it still makes a pretty sweet creature.


For my interpretation, I wanted the body to have a bloby, amorphous quality like other atmospheric beasts, so I drew it with little wisps of goo trailing off it. I tried to show its fins moving in a synchronized wave like the lateral limbs of an anomalocarid.

http://www.lane-mchs.org/Crawfordsville%20monster.pdf
Posted by John Meszaros at 10:26 PM No comments: