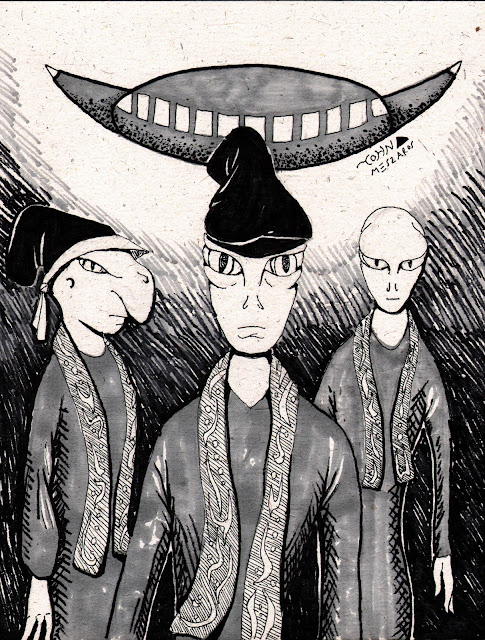 On the night of September 19, 1961 Betty and Barney Hill were driving to their home in New Hampshire after a trip to Quebec when they noticed a strange light following them in the sky. They stopped to watch the object for a bit then continued to drive. When they rounded a corner, they found the strange glowing object hovering over the highway in front of them. Barney got out to have a closer look and described the craft as being disk-shaped with a row of windows around its edge through which he could see several silhouetted figures. As he watched, a pair of fins or wings unfolded from the sides of the craft.

Terrified, the Hills  quickly got back into their car and sped home with the ship following close behind. For days afterwards Betty and Barney experienced anxiety and strange fragmented dreams about being led through the woods by odd, gray-skinned men.  Eventually they phoned the local air force base to relate their story, and Betty shared her experience with a couple close friends. Soon their tale began to circulate among UFO enthusiasts who eventually invited them to speak at a conference in 1963.  Enthusiastic members of the audience encouraged the Hills to see a clinical hypnotist to recall more of their story. They met with Dr. Benjamin Simon, a psychiatrist specializing in trauma-induced amnesia.

Simon’s hypnosis sessions slowly drew out a complete abduction narrative. Betty described the two of them being led aboard the craft by the aliens. Inside, the they were given medical examinations which involved the beings taking samples of their hair, skin and fingernails and examining their mouths, ears and genitals. Betty further described having a conversation with the apparent leader of the beings. When she asked him where he came from, he pulled down a star-chart to show her his home planet. Betty would later reproduce this map from memory and publish it in a number of UFO-related magazines. Amateur astronomer Marjorie Fish would eventually identify the stars in the map as Zeta 1 and Zeta 2 Reticuli, a binary system in the southern constellation of Reticulum (thus leading to another name for this type of alien, Zeta Reticulans).

The Hill’s descriptions of the beings that abducted them varied somewhat. Both described them as being short with gray skin and large heads that tapered to narrow chins. Outfit-wise, they were dressed in trousers and jackets without buttons or zippers.  Betty initially claimed the aliens had black hair and bulbous noses like Jimmy Durante, though she would later describe them as looking a bit like Tibetans or Amerindians from Patagonia. Barney recalled them having no noses, with only slits for nostrils, and another slit for a mouth.  Their leader, he claimed, wore a black scarf and a billed cap or hat. Under hypnosis, Barney would often become terrified by their eyes, which he claimed were so large and long that they wrapped partway around their heads.

Prior to the Hill’s abduction, the majority of reported alien encounters involved beings that looked like tall, blond beautiful humans. These benevolent “Nordics” often claimed to be from Venus, and said they had initiated contact with humans to bring offers of peace or warnings about the dangers mankind posed to the Earth. Barney and Betty’s tale marked a shift towards more nightmarish abductions where hypnotized humans were subjected to strange, painful and frightening medical procedures by large-eyed, gray-skinned beings.  While reports of encounters with such creatures had occurred before the Hill case, this was the incident that brought the imagery into popular culture.

The Hill case was dramatized in the 1975 TV movie The UFO Incident with James Earl Jones as Barney and Estelle Parsons as Betty.

Skeptics have come up with various theories to explain what happened to the Hills. Some have suggested that a combination of fatigue and stress caused Betty and Barney to experience hypnogogic hallucinations (hallucinations experienced when one is halfway between being asleep and awake) that were later elaborated on by their unconscious minds through nightmare and false memories.

As to the appearance of the beings, it is worth mentioning that extraterrestrials with bulbous heads and large eyes are not unprecedented. They have been a staple of science fiction tales going all the way back to the 19th century. If one takes a skeptical view of the Hill case, it’s not too difficult to imagine that Betty and Barney had encountered these depictions before and ended up weaving this image of an “alien” into their recollections of their abduction.

On an additional note, while the Hill case first brought the image of the Gray Alien into popular culture, the aliens’ current, much more stylized appearance- black, oval eyes, triangular faces, thin, wispy bodies- did not fully coalesce until the publication of the book Communion by Whitley Strieber in 1987. Like the Hills, Strieber described multiple frightening encounters with large-headed and large-eyed beings. His experiences, though, eventually developed a more spiritual undertone harkening back to the older encounters with peaceful Nordics bringing enlightenment to mankind.

The Big Book of UFOs by Chris A. Rutkowski

The Field Guide to Extraterrestrials by Patrick Huyghe

Yankee Skeptic: Who Invented Little Grays? Hollywood or the Hills?

Posted by John Meszaros at 8:56 PM No comments: