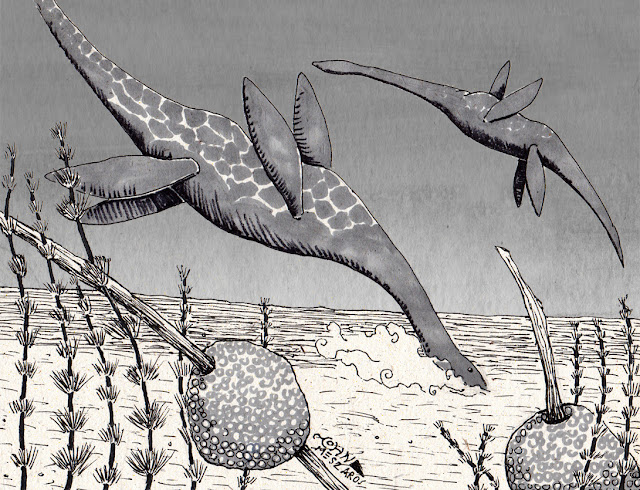 Along the western edge of Idaho lie the remains of an ancient island chain that crashed into North America millions of years ago, driven by the inexorable glide of tectonic plates.  Over time geological forces squeezed the land, pushing some sections up and dropping others down- a process known as block faulting- to create a range of low mountains through the land that would one day be called Idaho, Oregon, and Washington.

The ice came millions of years later, in the Pleistocene. Great glaciers flowed down from the boreal lands, gouging rounded valleys into the buckled terrain. When the ice eventually retreated, its meltwater filled the valleys. forming deep lakes, often dammed at their southern ends by moraines- huge piles of rock piled up by the grinding of the glaciers. One of these watery bodies is Payette Lake, located in Valley County, Idaho and named after Francois Payette, a French-Canadian trapper who wandered this land in the early 19th century.

Native Americans- including the historical Shoshone, Nez Perce, and Tukudeka peoples- inhabited the area around Payette Lake for thousands of years, usually living along the shore in the summer and migrating to other lands in the winter.  European-Americans only arrived in the area around 1862 when veins of gold were discovered. This influx of white settlers soon led to the creation of the town of McCall.

Like numerous lakes throughout North America, Payette is said to be home to an aquatic monster. The creature was first sighted in 1920 by a crew of railroad loggers working on the edge of the lake. At first, the men assumed the long, dark shape floating in the water was merely a log. Much to their surprise, however, this “log” began to bob and undulate before swimming away into the deeper part of the lake.

The mystery beast was sighted again in 1944. This time the witnesses got a better look at the creature, describing it as having a saurian head, camel-like humps and “shell-like” skin. This second sighting brought the monster to national attention, even leading to a mention in the August 1944 issue of Time Magazine. Regular sightings continued over the decades, bringing tourists and monster-hunters to the lake.

At first, the beast was dubbed “Slimy Slim”, but local folks soon decided that their resident monster needed a better moniker. In 1954 a national contest was held to rename the creature. The winning name, “Sharlie”, was sent in by  Lesle Hennefer Turry of Springfield, Virginia. The name references a catchphrase of comedian Jack Pearl from a radio and TV show that was popular at the time. The show typically had the same formula each episode.  Pearl’s character, Baron Munchausen (based on the infamous German folk hero and grand liar) would relate an increasingly outlandish story to his straight man, Charlie. When Charlie inevitably expressed incredulity, Munchausen would respond: “Ah, well, vas you dere, Charlie?”- which, due to the Baron's thick German accent, came out as “Sharlie”.

As odd as this origin may seem, the Payette Lake beast is far from the only cryptid to owes part of its mythology to pop culture.

The Mothman of Point Pleasant, for example, was named in reference to the 1966 Adam West Batman TV series which was immensely popular around the time that the creature haunted West Virginia.

Another, more recent example of a cryptid whose folklore was shaped by pop culture is the chupacabra of Puerto Rica. The appearance of the beast was originally inspired by the H.R. Giger designed alien Sil from the 1995 movie Species.

Then there is the appearance of Grey aliens- the most widely reported type of extraterrestrial in the past several decades and currently the definitive pop culture image of an “alien”. Their iconic large heads and oval eyes were first described in 1963 by abductee Barney Hill who, while under hypnosis,  described an encounter he and his wife Betty had had with the beings two years earlier.  It’s thought by some that Barney’s description of the beings may have been inspired by the TV series The Outer Limits- in particular, by the creature from the episode “The Bellero Sheild”, which aired a few nights before Barney first hypnosis session. Prior to this session, the Hills described the creatures as being more humanoid with huge “Jimmy Durante” noses and tight-fitting black caps.

Here I’ve illustrated Sharlie as the classic plesiosaur-type lake monster.  This modern creature is significantly changed from its Mesozoic ancestors, the biggest divergence being its swan- or periscope-like neck. Despite pop cultural depictions, prehistoric plesiosaurs did not have flexible necks that they held up out of the water. Their necks were rigid and held straight out in front like a fishing pole. This kept the relatively small head far away from the body, allowing the animal to sneak up on fish and other aquatic prey without the wake of its large body alerting them to its presence. Sharlie and other hypothetical lake monsters, however, have more supple, flexible necks.

Another major modification is the set of humps that are a distinct feature of many lake monsters and a sharp contrast to the smooth, keel-shaped backs of Mesozoic plesiosaurs. Perhaps the humps are for fat storage? That would be a distinct advantage in a lake or other enclosed freshwater environment where food is not always as abundant and consistent as in the open ocean.


For this reconstruction, I have imagined Sharlie as a filter-feeder. In 2015 paleontologist F. Robin O'Keefe redescribed Morturneria seymourensis, a fossil plesiosaur from Antarctica that had rows of thin, needle-like teeth that it had apparently used to strain food like a baleen whale (Mortuneria was originally discovered and named in 1984 by paleontologists Sankar Chatterjee and Bryan Small who had also speculated that the Antarctic plesiosaur was a filter-feeder. But these adaptations were not fully confirmed until 2015). Mortuneria is believed to have fed by gulping mouthfuls of seafloor sediment and straining the mud through its cage of teeth to catch tiny crustaceans, worms, and other burrowing invertebrates- a feeding method similar to that used by modern day gray whales. I thought this would be an intriguing feeding behavior for Sharlie and other lake plesiosaurs, and could also explain why they are rarely sighted since they would be spending most of their time near the bottom of the lake filtering the sediments.

Mysterious Universe article about monsters of Idaho, including Sharlie

An article about the fascinating geology around the Payette Lake area

Another article about the geology of the Payette Lake area

A clip of Jack Pearl as Baron Munchausen delivering the line "Vas you dere, Sharlie?"