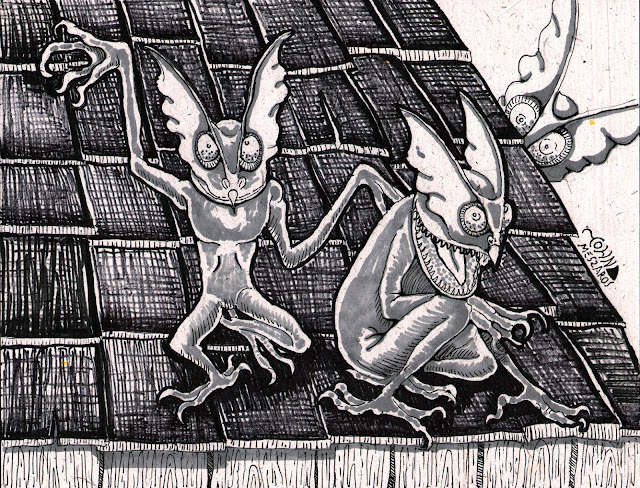 On August 21, 1955 Billy Ray Taylor was visiting friends, the eleven-member Sutton family, at their rural farmhouse on the outskirts of Kelly and Hopkinsville, Kentucky.  On his way to an outhouse, he reportedly saw several strange lights in the sky which he believed were part of an alien spacecraft. Taylor told the Suttons of his sighting but they dismissed it as just an hallucination.

Later that night, however, the people in the house heard bizarre noises outside. Billy Ray and Elmer Sutton went out with shotguns and encountered a gremlin-like being emerging from the woods.  Soon more of the “goblins”, as they eventually came to be called, appeared and terrorized the family throughout the night,  scratching at the outside walls and peering in through the windows. One of them even grabbed a victim by the hair when he stepped out onto the porch. At one point the police were called but the goblins quickly disappeared, only to return later to continue terrorizing the family for the rest of the night.

The goblins were described as having wide, large eyes, pointed, swept back ears and slim bodies with atrophied legs. They seemed to float with their feet just barely touching the ground, swaying their hips with arms up in the air as if wading through water. When the Suttons shot at the goblins, the creatures emitted a metallic clang and would flip backwards into the woods. If shot from a tree, they would glide to the ground rather than fall.

The Hopskinville Goblin case has become one of the most famous “alien encounter” stories in American folklore, along with the Mothman and Flatwoods Monster.  It was even the basis for a planned movie by Steven Spielberg called Night Skies that would eventually evolve into the much lighter and softer E.T. Go here to check out some cool pictures of the designs for the Night Skies

Although the origin of the goblins was never discovered, they are commonly believed to have been extraterrestrials due to Taylor’s sighting of lights in the sky just prior to their appearance.  Skeptics, however, have postulated that the goblins could, in fact, have been nothing more than a pair of large, territorial horned owls. And indeed, much of the creature’s anatomy is very owl-like.  The back-swept “ears” could easily be the tufts of feathers on the heads of many owls. The way that they moved with arms over their heads and atrophied feet dragging along the ground could be a misinterpretation of an owl flying low to the ground with its wings extended. The metallic sounds the creatures made when apparently shot could merely be the sounds of bullets bouncing off the house or outhouse. Though it might seem ridiculous that so many people would mistake ordinary owls for otherworldly creatures, the fear and adrenaline rush of the encounter combined with Taylor's claims of having seen strange lights could have easily distorted the Suttons' perceptions.

For my interpretation of the goblins, I’ve incorporated some of the owl explanation into their faces. The loping, wading gait recalled to my mind a gibbon walking, so I based some of the anatomy and pose on these apes.

http://www.cracked.com/article_16671_6-famous-unsolved-mysteries-with-really-obvious-solutions.html
(entry #4 talks about the owl explanation for the Goblins)

The Field Guide to North American Monsters by W. Haden Blackman
Posted by John Meszaros at 3:07 PM No comments: 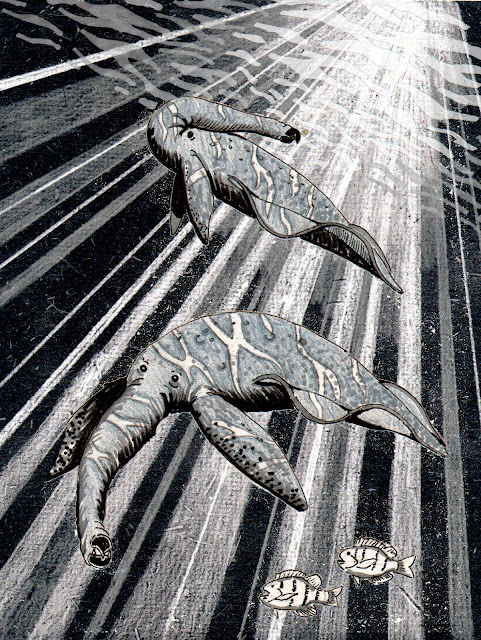 Just after the end of the Cretaceous, the area that would become Wyoming was a great basin filled with subtropical swamps and lakes. Over millions of years, the vegetation of the region built up into peat bogs which were periodically buried and compressed under sediment washed down from the nearby mountains, eventually solidifying into coal. As a result, this former swampland-- known today as the Powder River Basin-- is thick with the fossil fuel.

Of course, all that coal just lying around under the earth would seem to be a huge fire hazard. And it very much is. Coal seam fires- whether natural or manmade-- are a frequent problem in this region.  Natural fires occur due to grass or tree fires, and once they get going they can burn for decades.  After all the coal is burned away, a hollow space is left which can collapse. Such a cave-in formed Lake DeSmet, near Buffalo Wyoming.

Like most sizable bodies of water, DeSmet hosts its own aquatic monster, Smetty. Descriptions of the creature vary. Some say it looks like a giant eel with a horse-like head. Others say it resembles an enormous alligator. Still other reports claim it's a classic Loch Ness-style plesiosaur. Knowing the prehistory of the lake, it's not hard to imagine Smetty being some relic population of Mesozoic monsters hiding or lying dormant in deep, water-filled caves under the prairie until they escaped into the collapsed coal seam that became Lake DeSmet.

Rather than depict Smetty as the usual snakey-necked plesiosaur, I wanted to go with a more unusual lake monster interpretation.  English journalist and wildlife specialist Frederick William Holiday speculated in his book The Great Orm of Loch Ness that Nessie, and by extension, other lake monsters, might actually be a giant invertebrate, possibly a worm or mollusk. He compares the shape of Nessie-- a long neck, boat-shaped body and paddled limbs-- to the strange fossil worm Tullimonstrum gregarium found in the Mazon Creek fossil beds of Illinois. He explains that Nessie, or rather, Nessies, since there would obviously have to be a whole population of the creatures, being invertebrates would explain several anomalies about the monsters, such as why no bodies have ever been found (the creatures have no bones to wash ashore, and their gelatinous corpses rot quickly), why sonar scans of the loch sometimes pick up a creature and sometimes don’t (if the animal is lying on the bottom like a slug, it wouldn’t show up on the radar), why they aren’t seen more (being gilled invertebrates means they don’t have to come to the surface for air) and why many people who have seen the beasts up close often seem more horrified and revolted than one would expect from merely sighting a giant aquatic reptile. In Holiday's explanation, the “neck” of Nessie is actually the trunk of this invertebrate while the paddled limbs are related to the odd extensions on the side of Tullimonstrum*.

But then if Nessie is a giant Tullimonstrum, or at least a distant relative, what then is Tullimonstrum itself? Although a definitive taxonomic placement hasn’t been made, it does bear similarity to a mollusk.  Specifically Pterotrachea, a group of pelagic sea snails.


If you’re confused at what you’re looking at, the dunce-cap like  structure at the front is a trunk of sorts with a hard “beak” called a buccal mass.  The flappy thing on top is the snail’s foot modified into a fin. The animal is, thus, swimming on its back with the trunk flopping back over its up-turned stomach.  Although Tullimonstrum’s resemblance to Pterotrachea is probably just convergent evolution, the former creature does possess a hardened, pincer-like buccal mass at the end of its trunk, along with a pair of prominent eyes like a predatory mollusk. At the very least, it’s quite possible that Tullimonstrum was another species of marine snail that developed a similar body plan.

Anyway, this mini-lecture was mostly just a roundabout way of saying that I based my Smetty design on Pterotrachea. Like Holiday’s invertebrate Nessie, the DeSmet monsters have long, flexible trunks which frightened onlookers often mistake for plesiosaur-like necks. This trunk actually does parallel the plesioaur’s elongated neck since it creates a smaller profile, allowing the animal to get in close to prey without causing disturbances in the water from its larger body.

As to how these creatures even got into Lake DeSmet in the first place, I still like the idea of them living in aquatic caves beneath the prairie and migrating into the gap created after the pre-lake coal seam burned away and filled with water.

By the way, go here for an awesome blog post about Pterotrachea by Joseph Jameson-Gould of Real Monstrosities


*The paleontology/biology nerd in me is compelled to point out that while Holiday compares Nessie’s flippers to the projections on the side of Tullimonstrum, said projections are, in fact, eyes on the fossil animal, not locomotory appendages.