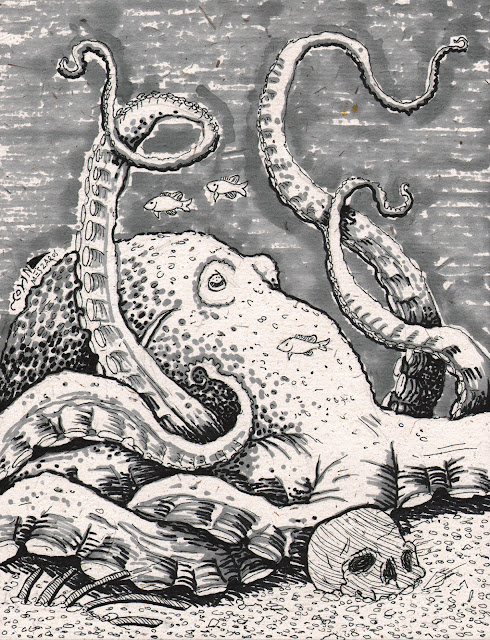 The idea of a freshwater octopus isn’t too outlandish, especially compared to some of the cryptids on this blog. Other marine animals have made the jump to lakes and rivers, including mussels, clams, snails, bryozoans and jellyfish (though the biologist in me is compelled to note that the freshwater jellyfish, Craspedacusta sowerbii, is of the class Hydrozoa rather than Scyphozoa, which are the “true jellyfish” like moon jellies, lion’s mane, upside-down Cassiopeia jellies and others). The bull shark, Charcharhinus leucas, is infamous for its habit of swimming up estuaries into freshwater. There is even a rare group of poorly-understood, exclusively freshwater sharks in the genus Glyphis that inhabit the Ganges and Irrawaddy rivers. Taking all these into account, it isn’t a huge stretch to imagine an animal as intelligent and curious as the octopus  evolving to live in freshwater.
Perhaps this has, in fact, happened, if urban legends about gigantic octopi inhabiting lakes in Oklahoma are to be believed. According to rumor, Lake Thunderbird, Lake Oolagah and Lake Tenkiller are all home to red, truck-sized cephalopods that may be responsible for the upswing in drownings in recent decades.

This is actually not the only time freshwater cephalopods have appeared in legend. Devil’s Lake in Wisconsin is said to be haunted by two distinct types of monsters. One is a classic Nessie-style plesiosaur. The other is a tentacled beast that was said to have attacked a canoe of Native American men paddling across the lake to more fertile hunting grounds. The origin of this particular story is hard to trace. It’s unclear if it genuinely originated with the Nakota Sioux who call the land around Devil’s Lake home, if it was an invention of European settlers, or if perhaps it was even a modern invention given a precolonial setting to try to create more legitimacy.

Another, more ambiguously cephalopodic cryptid comes from London. The house at 50 Berkeley Square in the West End was infamous in the 18th and 19th centuries for being haunted by a shapeless gray Thing. Though the bottom floor of the house has been consistently occupied, the second floor rooms have long been left empty because anyone who sleeps in them will, according to the legend, will literally be frightened to death by a visit from the Thing in the middle of the night. Calling the Berkeley Square Horror an octopus is, admittedly, a bit of a stretch. Descriptions of the entity are vague and contradictory. Some witnesses said it looked like a collection of shadows or an amorphous blob.  Others claimed it was  a twisted, man-like specter. At least one witness, though, did describe the Horror as a bizarre, tentacled creature like a deformed octopus. Assuming the Horror was not something supernatural, perhaps it was indeed a species of freshwater octopus that found its way up the Thames and into London’s vast sewer system, where it eventually emerged in the Berkely Square house.

While the marine ancestors of the Berkely octopus may have migrated into the Thames via it’s link to the North Sea, it is more difficult to imagine how cephalopods could have moved deep into the land-locked interior of North America. This is further compounded by the fact that none of the lakes inhabited by America’s supposed freshwater octopi have outlets to the sea. Devil’s Lake lies at the bottom of a closed drainage basin-- a glacially-created valley that does not link to any rivers with links tot he sea.  Lakes Thunderbird, Oolagah and Tenkiller, furthermore, are reservoirs created in the 1940s and 50s. How then could octopi even get into any of these bodies of water?

Well, maybe they just walked. Terrestrial, octopus-like cryptids have been occasionally sighted around the world.  In 1961, two Spanish truck drivers reported encountering an odd creature covered in rust-colored fur that stood upon four tentacle-like limbs.  Octopi are actually known to venture out of the water for short periods of time, usually when they are moving between tide pools in search of prey. Perhaps some evolved an even more amphibious existence and took to venturing farther and farther inland in search of food.

Even the unusual “fur” on this Octosquatch is not unprecedented. A small species of taxonomically undescribed  hairy octopus is known to inhabit the waters around Indonesia. The filaments covering this creature’s body-- which are extensions of its skin rather than the genuine fur of mammals-- are believed to provide camouflage in the furry red algae common to the creature’s habitat. Perhaps the land-walking cephalopod also developed a similar covering, though in its case the filaments may have been used to provide insulation and possibly to hold water against its body during terrestrial excursions.

Perhaps an Octosquatch-like species gradually made its way into North America, using freshwater lakes as stepping stones. Over time, this creature may have lost its terrestrial abilities and become fully aquatic again, eventually becoming the enigmatic monsters terrorizing swimmers and Native exploration parties in the Midwest.

Posted by John Meszaros at 8:18 PM No comments: