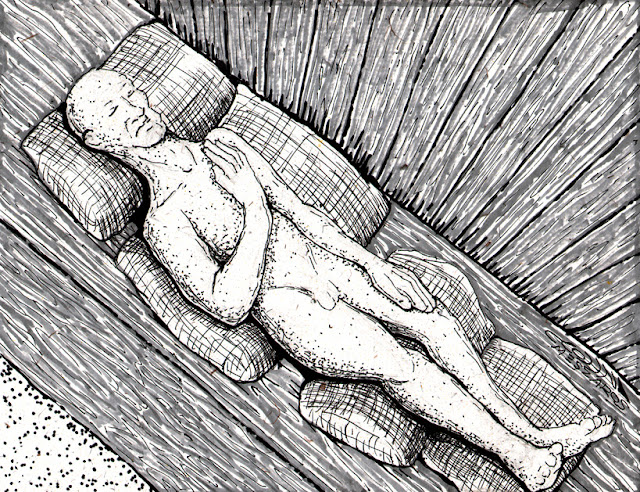 In 1877, an amateur fossil hunter named William Conant was poking around a hill in Beulah, Colorado when he noticed a stone shaped like a foot sticking out of the ground. Digging around the odd find, he discovered an entire man made of stone; a petrified human being over seven feet tall and with a nub of a tail at the base of his spine.  The thing was soon dubbed “The Solid Muldoon”, likely in reference to then-famous wrestler William “The Solid Man” Muldoon, and put on display for curious onlookers. Some speculated that the petrified man was one of the giants of the Bible said to have drowned in Noah’s flood.  Others thought it had never been a living being, but was in fact a statue from a forgotten race.

Eventually the Solid Muldoon was revealed to be a hoax made out of rock flour, plaster, pulverized bones, blood and meat. However this revelation did little to diminish people’s interest in seeing it. Only now they were coming to see the “petrified man” precisely because he WAS a hoax. Fake he may have been, but he still made a good story to tell folks back home.

The Solid Muldoon wasn’t the only “petrified man” dug up in the 1800s. In 1869, his more famous cousin, the Cardiff Giant, was discovered on a farm in Cardiff, New York by two men digging a well. Like the Solid Muldoon, this ten-foot tall figure was believed by many to be the fossil remains of a Biblical giant.

Both the Cardiff Giant and the Solid Muldoon were actually the creations of New York tobacconist George Hull. Hull, an atheist, once got into an argument with an Iowan Methodist revivalist about the literalness of passages in the Bible, particularly stories of giants once having roamed the world. Hull, realizing that some people would believe anything,  got the idea to create his own stone giant and pass it off as a Biblical fossil. He hired a group of Iowa men to quarry a huge block of gypsum, then shipped it to Chicago where a German stonecutter carved it into the shape of a huge, recumbent man. From there Hull had the giant brought to New York (wrapped in tarps to keep it secret, of course), where he buried it on the farm of his relative, William Newell. Several weeks later, the Giant was dug  up “by chance” by a couple of Newell’s men.

The Cardiff Giant quickly attracted enormous crowds, who paid 50 cents apiece to see it. His popularity become so great that eventually P.T. Barnum offered to buy him. When the showman was turned down, he made his own exact replica for display in his Manhattan museum.
As more and more skeptics examined the original Cardiff Giant and declared it to be fake, Hull grew nervous and sold his creation. Later, though, he would try the giant-crafting business again in Colorado with the Solid Muldoon.  To this new creation he added a short tail, perhaps as a reference to Charles Darwin’s Theory of Evolution which was just starting to gain ground at the time.
Petrified men became a bit of a cottage industry in the late 1800s. In 1879 another giant, also eventually proved to be a hoax, was dug up near Taughannock Falls, NY.  In 1892, infamous conman Jefferson Randolph “Soapy” Smith commissioned McGinty, a fossilized mummy, for display at one of his establishments in Creede, Colorado. Many more petrified men were crafted and dug up all over the country.

There are several reasons for Americans’ brief obsession with buried stone men. For many, these giants provided confirmation of the Bible, particularly tales of giants killed in Noah’s flood. This belief in giants’ remains actually has a long history in America. Over a century before the Solid Muldoon and his cousins,  colonists all across the eastern United States were digging up what Cotton Mather and other Puritans believed to be the bones of enormous human beings in their fields. These bones, however, would eventually prove to be those of American mastodons.

Beyond those looking for a confirmation of Biblical passages, there were also plenty of people just curious to see the latest unusual attraction, even if they knew it was a fake. It’s the same curiosity that led folks to seek out carnivals and sideshows and oddities such as the ones Mr. Barnum displayed in his museum.

The Taughannock Giant-- Life in the Finger Lakes

Posted by John Meszaros at 8:49 PM No comments: