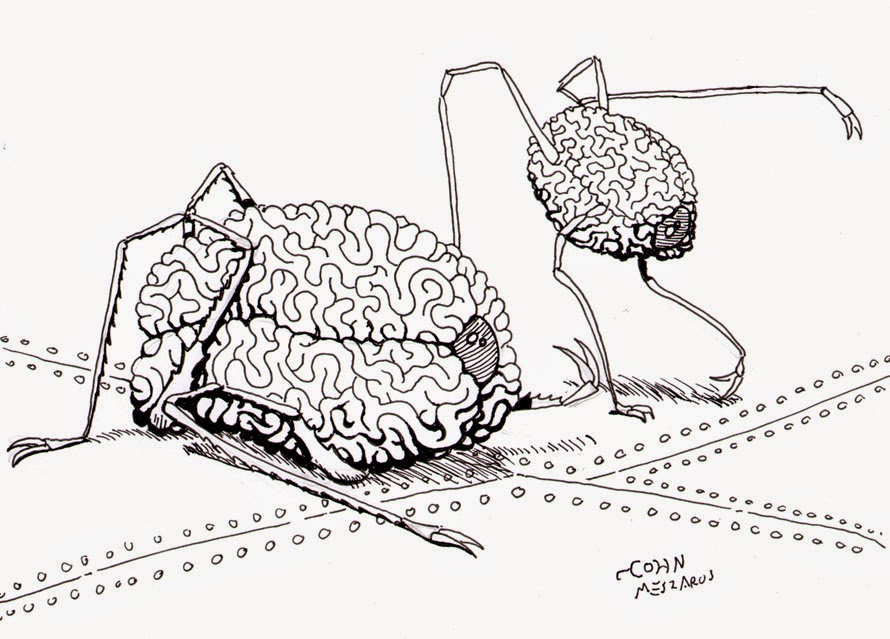 Late at night in August of 1971, two residents of Palos Verde, CA-- Peter Rodriguez and John Hodges-- got into their car after leaving a friend's house and flicked on the head lights to discover two bizarre, brain-shaped beings squatting in the road in front of them.

Frightened, the two men sped away into the night.  After dropping off Rodriguez, John Hodges drove home only to discover that this normally 10-minute trip had taken almost 2 hours.  As often happens in cases of alien encounters, Hodges had a large gap of "missing time", where he could not explain where he'd been or what he'd been doing.

After letting the strange events of that night marinate in his mind for five years, Hodges finally decided to undergo hypnotherapy to try to discover more of what happened.  Under hypnosis, he "recalled" that one of the brains had said to him:

"Take the time to understand yourselves.  The time draws near when you shall need to.  You shall not remember this incident until we meet again."
--quoted from Americanmonsters.com

Regressing further into his "lost" memories, Hodges discovered that the brains had been waiting for him at his home after he dropped Rodriguez off.  Somehow they transported him to a metal room full of computers where he encountered several seven foot-tall web-fingered gray-skinned beings.  These creatures explained that the brains were actually just organic translators to allow them to communicate with Earthly life.  As often happens with these types of alien encounters, the gray beings warned that humanity must learn to control it's dangerous power or face obliteration-- though whether by our own hands or by the advanced technology of another race is not clear.

I initially learned of the Space Brains from an article on non-gray aliens at Bogleech.com, which features illustrations by Eric Kowalick-- also known as Monster-Man-08 on Deviantart.  I didn't want my version of the brains to look like just a copy of Kowalick's already pretty cool design, so I tried to give them a more wrinkled, almost brain coral-like look.  Plus insect-like walking limbs (which, admittedly, were inspired from a creature in an old adventure from Dungeon magazie called "The Night Parade").

Runner Up: The Fresno Nightcrawlers 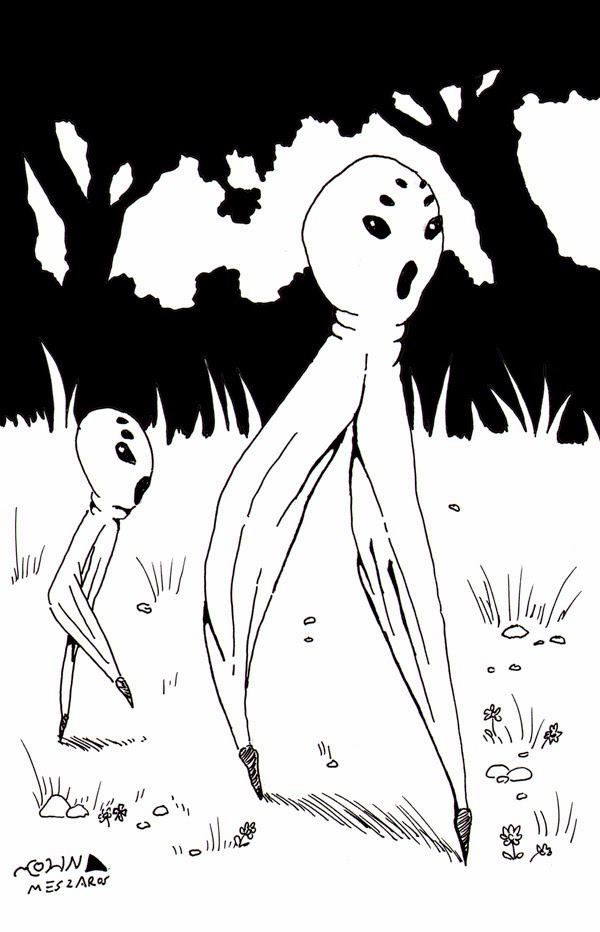 Although the Palos Verde Brains are the "official" (at least according to my goofy little blog) cryptids of California, I also found the recent phenomenon of the Nightcrawlers cool and weird enough to give them an honorary "Second Banana" status.

Information about these cryptids is spotty, and mostly found piecemeal on various blogs and wikis across the web, but here is what I've managed to gather:

In 2011, a video appeared on Youtube supposedly showing two strange, bulbous-headed creatures drifting across a lawn in Fresno, CA.  The beings' lower bodies are either made of two strips of cloth-like material, or they have a pair of billowing, pant-like legs.  The video is too grainy to see them clearly.

A few months later, another video appeared supposedly showing a pair of the creatures walking down a hill in Yosemite.  The second set of creatures are a bit clearer and appear to be nothing but round heads on a pair of bendable, stilt-like legs.

The videos gathered enough notoriety that they were eventually featured in one of the Syfy Channels paranormal investigation shows.  There are even rumors of "Native American legends" about the creatures going back at least a hundred years, though no one has yet provided a more detailed account of what these stories are actually about, or where they come from.

Looking at the videos, it seems pretty clear that the creatures in the first video are nothing more than cloth puppets similar to classic Halloween ghosts being pulled along on strings.  The second video is a little harder to identify, though, as one commentator has pointed out, it is possible that the beings are just CGI.

Even if the Nightcrawlers are pretty obvious hoaxes, though, I think they still deserve a place in California cryptid folklore, if for nothing more than their unusual and rather haunting appearances.
Posted by John Meszaros at 11:10 PM No comments: